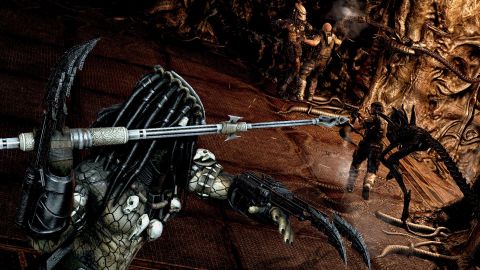 Our favorite sound, probably out of all of them, is the ones made by aliens when they’re being horrifically slaughtered in their second film, Aliens. It is, we think, based on a heavily distorted recording of a trumpeting elephant, sped up to make it absolutely terrifying in a way only the panicked, high-pitched scream of a flailing pachyderm can be.

In second place it’s the dense, tinny shred of a pulse rifle. Every Aliens vs Predator game has understood the importance of replicating the most aurally recognisable aspects of its characters, and this release mostly continues that tradition. It sounds incredible, although we were a bit disappointed that many of the Predator’s sound effects appear to have been taken from the AvP movie, as opposed to the original Predator film. It’s a small issue, and one that won’t bother many, but we’re particularly fond of the original Predator’s vision and vocal sounds, which were replicated perfectly in Aliens vs Predator 2 back in 2001, so it’s a bit weird that they went with many of the weaker, “updated” sound effects. We really missed the wonderful whip-crack sound of the Predator vision kicking in.

Still, the overall sound design is rich enough to make us want to say words like “aural soundscape” and “crunchy sonic feast”. Here’s a game that’s mostly about inflicting horrendous injuries on deserving creatures, and it’s one in which you’ll appreciate every sinewy crunch, gargled howl, bloody slosh and hollow snap. Aliens vs Predator is sickeningly violent – more so in one of the three campaigns than the others, admittedly – in ways that are borderline comical and dancing on the periphery of decency.

Lovely, spine-tearing, eye-socket spearing madness then. Where the films lost credibility the moment they went PG, Rebellion’s AvP wears its M-rating with pride. In the area of brutality and scariness, these are Schwarzenegger’s Predators and Ripley’s aliens. Sadly, these are the same one-dimensional barking space marines you’ve seen a thousand times before, but the point stands – this game doesn’t flinch in showing you brutality on a level not seen since the early films. The good ones.

Three campaigns straddle the same plot arc, giving you three perspectives from which to view the various goings-on, and three markedly different experiences. The Marine draws the short straw: a panicking, fleshy sack of prey permanently seconds from being scythed in two by a swishing xenomorph tail. It’s a campaign of fear, into which Rebellion stir a steady stream of ratcheted tension. The cautionary beeping of your motion tracker is such a recognisable device that it hardly needs explaining, but here you go: the closer a moving object is to you, the higher pitched and more rapid the beep. The thing generates fear, and sounds just as you remember from James Cameron’s Aliens.

Registering false positives in nearly every darkened corner, the environment takes pleasure in suggesting random shadows might contain dripping alien death. You’ll be yelping at vents, alarmingly shaped shadows and dangling bits of wire which, in a case of misjudged engineering, look identical to the tails of lackadaisical, ceiling-dwelling aliens.

The Alien campaign, on the other hand, is a reduced affair. Weapons are replaced by tooth and claw, and the unique ability to climb on any surface allows you to stalk marines from the darkness like a pervert Spider-man.

Behind door number three is the Predator campaign, starring a more technical character who boasts thermal optics, camouflage, a plasma cannon, proximity mines, a big spear and a sharpened Frisbee. He can leap great distances: holding down the focus button projects a cursor onto platforms you’re pointing at, and, if it’s a valid spot, hitting jump will cause him to leap like a badass. Some may find this mechanic restrictive or too compartmentalized, but we enjoyed the ease in which we jumped around the environment.

Steve Hogarty is The Fixer - mending videogames one cliché at a time.