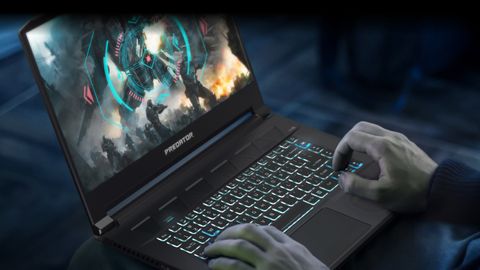 The Predator Triton 500 isn’t without fault, but it’s one of the better - and more affordable - RTX-powered gaming laptops we’ve tried.

The best gaming laptops have a lot to juggle. For starters, they need to be portable enough to justify not buying a desktop PC in the first place. However, squeezing the horsepower you need into a machine that doesn’t require a wheelbarrow for transport is… well, it can be a headache. What’s more, laptops also need to have good specs under their belt without an astronomical price tag to go with them. The Acer Predator Triton 500 somehow manages to balance all of the above and come out the other side mostly intact. It gets a few knocks along the way, but in a broader sense, this is a notebook worthy of your attention.

Let’s address the elephant in the room - despite being designed to fit on your lap, gaming laptops are often hefty chonks that can be seen from orbit. Happily, the Triton 500 bucks this trend with a sleeker look than you might expect. That’s thanks to a Max-Q design, something hardware giant Nvidia calls “an innovative approach to crafting the world's thinnest, fastest, quietest gaming laptops”; Acer lives up to the brief. While Max-Q cards sacrifice a bit of performance compared to their full-size equivalents, the reduction in form factor is worth it for anyone who prioritizes portability.

Although the Triton 500’s aggressive logo and angular font feels slightly ‘boy racer’, this is also a subtler gaming notebook than you may be used to. Its RGB lighting is a subdued blue by default, and any dashes of flair are handled with restraint. For example, the WASD and directional keys feature undistracting cutouts around their edges to reveal an RGB glow beneath. Meanwhile, triangular vents at the back inject a sense of industrial cool to proceedings. The metal-rimmed touchpad impresses, too. I’m still not convinced by that edgy Predator signage (it’s trying a bit too hard), but otherwise this is a handsome piece of kit.

At just 4.41lbs (2kgs) and with a screen maxing out at 15.6”, the Predator Triton 500 isn’t the biggest laptop on the block. I was grateful for that - it can fit comfortably inside a backpack and its lightweight build makes it easy to transport. Which is surely the point, right? Otherwise we’d just go for the best gaming PCs and be done with it.

The specs are equally good. Our test version - which costs $1800 - sat at the more affordable end of the spectrum with an Intel Core i7-8750H processor, Nvidia GeForce RTX 2060 6GB graphics card, 16 GB of DDR4 SDRAM, and a 512GB SSD. In plain English, this allows you to get your hands on fancy ray tracing for less. If you’d prefer more horsepower under the hood, Acer offer models featuring an i7-9750H CPU and RTX 2080 GPU instead (these tend to go for around $2600). And no matter which one you choose, all Triton 500s come with a Turbo button for instant overclocking, PredatorSense software to mess about with everything else, a 15.6 inch IPS screen with Full High-Definition display, 144Hz refresh rate, and 3ms2 response.

Honestly, the only thing we didn’t like about its feature set was the ungodly wail it hurls at you upon being turned on. Every. Damn. Time. While it’s cool to see the Triton 500’s stereo capabilities in action, witnessing the shriek of a robot being skinned alive (or whatever unspeakable torture it’s being put through) upon booting up is not.

How does the Predator Triton 500 perform? We asked our friends at Maximum PC to help us find out.

In brighter news, the Predator Triton 500 fares well when it’s time to get its hands dirty. The touchpad was satisfying to use (though you’ll probably want the best gaming mouse instead when it comes to playing games), and its keys feel good with a depth of 1.7mm and 70 grams of force to actuate them. The keyboard has been squashed in places and that takes a while to get used to - I hit lots of keys by mistake at first - but I was generally happy with it.

Acer also nails the screen. Even though it is FHD rather than 4K, this display boasts sharp textures and deep colors that are sure to impress. We just wish it was sturdier; the plastic at the bottom is incredibly flimsy and prone to wobbling if you so much as prod it. Annoyingly, that’s true of the lid as a whole.

Still, its powerful innards make up for this. As you’d expect from such high-end tech, the Predator Triton 500 chews through demanding games while making them look gorgeous. Everything from Sekiro: Shadows Die Twice to Apex Legends are visually incredible here, and they run smoothly as well. We did have issues with our cheaper model struggling to balance games and background processes every now and again, but such is the curse of Windows.

In fact, one of the few real problems we encountered was battery life. The Triton 500 will only last for a couple of hours away from a plug, and that’s far from ideal. The device’s temperature isn’t great either. The downside of cramming so much power into a small space is the heat it generates, and this laptop gets blazingly hot when under strain. You could probably cook an egg on it if you got peckish. What's more, it has a knock-on effect due to noisy fans trying to compensate.

That’s not a disaster though - these aren’t issues unique to the Triton 500. For the most part, it impresses in a lot of areas where the competition doesn’t.

The Predator Triton 500 pulls off a tricky balancing act; it’s a mix of subtle and over-the-top, power and size. Even though there are some bizarre design choices at play that undo such goodwill (namely that god-awful boot-up sound), it impresses for the most part. I’d recommend picking up a more powerful model where possible, but you’ll still be happy with the leaner version we tried.

The Predator Triton 500 isn’t without fault, but it’s one of the better - and more affordable - RTX-powered gaming laptops we’ve tried.