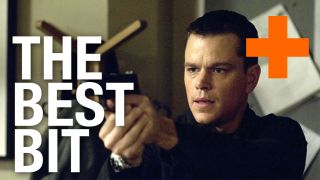 Unsurprisingly, The Bourne Identity is a solid action thriller with much to recommend it. But anyone who has seen the movie will tell you that the highlight is unquestionably the fight scene that goes down in the Paris apartment.

Jason Bourne is still experiencing amnesia, so he and his new companion Marie have returned to his old home in an effort to piece together more of his past. It’s a spartan dwelling, and the slow camera shots across the bare rooms create a sense of unease. Their search for information is interrupted by an assassin, Castel, sent by the ominous Treadstone operation to silence Bourne.

What follows is a masterpiece of fight choreography and character. There’s a clinical precision to the whole exchange. In slicker, sleeker movies, the action sequences can be more style than substance. The movements are showy to the point of being useless should you try them in a real scuffle. Not so here. Matt Damon and Nicky Naude are going at it to the death. Nothing in the action looks staged. No holds barred, and no movement wasted.

Take the bit with the pen. In lesser hands, this idea could have been played for the gross-out, maybe taken to the eye or the jugular vein, with ink and blood mingling on the assassin’s neck as he gasped a final breath. Instead, what played out felt like the most natural response for this type of fighter. Bourne uses it efficiently to get the knife out of his assailant’s hand, improving his odds to survive. If there had been a stapler or a ruler on the desk, he would have turned those office supplies into something equally dangerous and useful. There’s the tiny bit of ick factor when Castel pulls the pen out of his hand, but again, it’s not played just to be gruesome. That’s just what a trained killer would do.

The scene isn’t just a visceral depiction of a life-or-death fight. It’s also a pivotal moment in Bourne’s coming to terms with who and what he is, even as he’s still remembering the details.

The man is a machine.

It’s the first action scene where he doesn’t have any hesitance, no questioning of his skills or decisions. He moves from sleuthing out hints of his identity to scanning for intruders with barely a blink. He shows no emotion in the shift from fighting for his life to running for it. There’s no beat given over to realizing the weight of what has just happened. That entirely falls to Franka Potente as Marie. She starts losing her cool when she sees her photo in the attacker’s bag, and then falls into a state of shock when the attacker leaps out the window rather than divulge information. Her reaction – the more human reaction, you could argue – makes the contrast with Matt Damon’s matter-of-fact demeanor even starker.

The current zeitgeist with action movies is for complex characters, where even the heroes have dark pasts or questionable motives. The Bourne Identity did all that back in 2002, and it did so with swift actions and few words. But would you expect any less from an underground black ops agent?