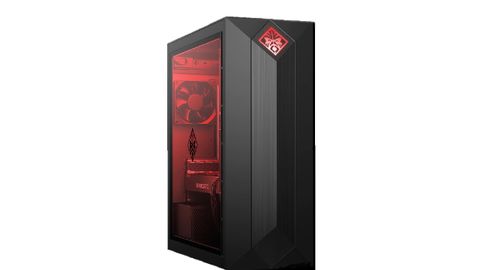 WIth an origin story that dates all the way back to a tiny Palo Alto garage in the 1930s, Hewlett Packard has been one the premiere names in prebuilt PCs for a very long time. Their Omen line of desktops and laptops is their midrange play, aimed at gamers who value performance but don't have a massive budget to burn on their hobby. The Obelisk is the desktop offering, and it's constructed from some powerful parts at a price very near what you'd pay to assemble it yourself.

The Obelisk won't wow you with its aesthetics, and it doesn't have a lot of room for further upgrades and expansion, but if you're in the market for a PC that can handle the current generation of games at 4K and will easily tide you over for several years into the next generation, the Obelisk is an excellent choice. It's solid value and demonstrates HP's long-running reputation of focusing on the important elements of prebuilt machines without bloating the budget with needless extras.

For some other excellent prebuilt options, be sure to stop by our best gaming PC roundup. And to find sexy new peripherals to attach to your machine, check out the best gaming keyboard and best gaming mouse you can find anywhere.

The Obelisk is packed into a fairly standard micro-ATX case and while the interior is pleasantly open there's very little wasted space. This means that the Obelisk is pretty slender, though slightly taller than many desktops - it's easy to tuck out the way under or alongside a desk or to slide into the chamber of an entertainment center. The exterior of the case is fairly simple and attractive, with hard black lines and a triangular design clearly inspired by the machine's namesake, and the logo centered on the upper front panel can be lit via the Omen Command Center to any color your heart desires. There's a tempered glass pane on one side of the case adorned with the same logo, through which you can see the PC's internals.

It's here that the aesthetic design of the Obelisk stumbles. The interior of the case is illuminated but the colored lighting can't be adjusted, meaning you're stuck with the sort of gloomy yellowish-red that's the system default. While the poor lighting doesn't do it any favors, the interior build isn't the sort of showcase that would look particularly gorgeous even under ideal conditions. The CPU cooler is offset diagonally, which looks sort of clumsy, and aside from the RTX 2080 the performance parts are very bland looking. It's a workmanlike presentation that belies the sleek, monolithic black design of the rest of the case. The lower-spec model of the Obelisk replaces the glass panel with opaque black plastic, and I actually prefer the look of the cheaper offering.

Performance is the category where the Obelisk shines. The model I reviewed comes equipped with a Core i7-8700, a Nvidia Geforce RTX 2080, 32GB of HyperX DDR4-2666MHz RAM, and a 512GB SSD (as well as a 2TB HDD for additional storage). The 32GB of RAM is very welcome, and works in tandem with Nvidia's shiny new ray tracing card and the 8th gen processor to manhandle games at 1440p Ultra and even admirably chew through newer titles at 4K Ultra.

Using Shadow of the Tomb Raider's internal benchmark utility, the Obelisk returned an average of 89 FPS at 1440p and a very respectable 39 FPS at 4K. The Total War; Warhammer 2 results were slightly less impressive but still solid, with the Obelisk managing 57.5 frames per second at 1440p but struggling at 26.9 FPS at 4K. It's a solid baseline performance even at 4K, and turning down a couple of dials easily yielded over 60 FPS in several other games I tested at 4K. Of course, neither of the titles we used for benchmarking support ray tracing or DLSS, which are reportedly fairly demanding rendering techniques, so with those enabled 4K may be a less viable resolution on the Obelisk without significant frame drops. That's purely speculation at this point, however, and will largely depend on how well optimized devs implementation of DXR is from title to title.

As we'd expect from Intel's 8th gen Core i7, the 8700 clocked in at a strong 1385 cb in  Cinebranch's CPU benchmark, and at 186 cb in single core performance. That's right around where we'd expect the 8700 to land, and similar to results returned by other machines with the same processor. The 8700 is an excellent choice for gaming PCs because while it's a very capable CPU, it's not ridiculously overpowered (CPU performancing being a fairly secondary concern for gaming) and is thus reasonably affordable, leaving some room in the budget for builders to splurge on other parts like the Obelisk's 32GB of RAM. It is a shame, however, that we get the non-K processor which can't be overclocked, something of a theme across the Obelisk - what you see is what you get, and there's little room to upgrade.

While the 32GB of included RAM is nice, it's a good thing the initial allotment is so generous because the Obelisk only has two DIMM slots. There's also only a single additional storage bay for another drive, which comes as something of a disappointment for someone who's gathered a massive collection of hard drives over the past several years. And there's no room to SLI in an additional video card, which looking at the included 2080 doesn't feel like much of an issue in the present, may seem limiting a few years down the road. While the Obelisk does have really handy toolless interior access (the glass panel pops easily off at the press of a button on the rear of the case), the overall sense I get from the machine is that it's designed to be used as is and the hardware has been appropriately future proofed as a result. While this makes sense in the review unit we tested, it becomes more of an issue with the lower-specced iterations of the Obelisk that are available.

The Obelisk delivers where it counts: performance and value. At less than $2,400, the Obelisk is a lot of machine at a very competitive price, and we've seen a model with 16GB of RAM going for as little as $1499. At that price, it goes from solid value to an absolute steal, but even at MSRP the Obelisk is a good deal, priced competitively with similarly specced machines like Corsair's Vengeance 5180, which packs 16GB less RAM but adds features like liquid cooling and and an over the top RGB lighting package.

That's illustrative of the Obelisk as a whole - it eschews flashy extras and frills and instead delivers a package that's laser focused on delivering performance right now, with little to no fuss. It's a very plug and play - if you don't want to tinker with it, you can go from plugging it in to playing AAA games in 4K in a matter of minutes. While it may not be perfectly oriented to be the machine of tomorrow, it makes a very strong case that it's perfectly suited to be the machine of today.