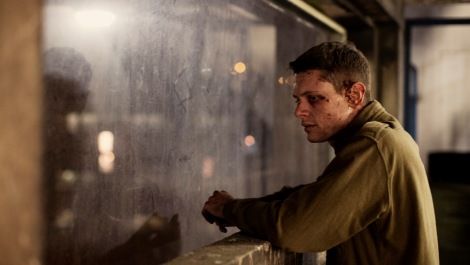 Two things reign supreme in Yann Demange’s excellent urban warfare odyssey, set in the eponymous year amid the Northern Ireland conflict: chaos and violence. Before we even meet new army recruit Gary (Jack O’Connell), we hear the pounding of his boxing gloves. He’s dishing out a beating in a dreary municipal hall. “Welcome to the regiment,” deadpans an anonymous officer, as the match ends with both combatants bloodied.

Turns out, it’s appropriate preparation for another unwinnable battle – Gary and co are deployed to Belfast, where they’re sent out on the streets and told, “This is the front line.” Trouble is, nobody seems to know where that line really falls.

As the new recruits patrol a no-go zone of tooled-up locals and boarded-up terraces, the violence intensifies: from piss, shit and projectiles thrown, to burning cars, to punches, bullets and splattered brains. In the heat of battle, Gary loses his unit and is left to make his way home alone. “Is he dead?” asks his CO (Sam Reid). “We do not know,” says creepy intelligence officer Captain Browning (Sean Harris).

Often, Gary doesn’t seem to know himself. Scared, injured and alone, he’s simply trying to survive behind ‘enemy’ lines, without really knowing who the enemy is. “He’s a soldier, we can’t help him,” says Brigid (Charlie Murphy) when she finds Gary collapsed in the street. “We have to,” says her father ( Good Vibrations ’ Richard Dormer), a potentially fatal move for them all.

Tense and shocking but sympathetic, Gregory Burke’s script does so much so neatly you barely notice the heavy lifting. Pointless conflicts proliferate (such as when Gary tells Brigid that David Bowie’s for girls), and we explore the conflict from all sides: Catholic and Protestant, old and young, angry and appeasing, the violent and their victims. One line, uttered with barely suppressed scorn by Browning, seems to sum up the whole sorry mess: “It was a confused situation.”