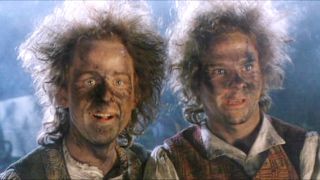 Pow! Zip! Bang! That noise you hear is the sound of a glorious firework symphony. Whether it's Bonfire Night in Britain or the fourth of July stateside, fireworks are an inescapable part of modern life. Gone are the days when people thought they were looking at magical explosions in the sky, yet movies certainly love to show off how otherworldly those eruptions of colour can be. We've rounded up the top 25 uses of fireworks in movies, so join us in lighting the fuse and see which colour explosion made it to number one!

The firework scene:  Mushu (Eddie Murphy) kills the villainous Shan Yu (Miguel Ferrer) by firing a bundle of rockets at him.

Don't try it at home:  "Don't aim them at people" is the first rule of fireworks, regardless of whether or not you're a cartoon dragon.

The firework scene:  James (Jesse Eisenberg) and Em (Kristen Stewart) put aside their awkward 'will they / won't they?' flirtation to sit happily side-by-side watching the Adventureland theme park 4th of July fireworks display.

Don't try it at home: Great as fireworks are for romance, there are cooler song choices than Crowded House's Don't Dream It's Over.

The firework scene: The rodent spies are pursued in their customised 'hamster balls,' inadvertently setting off a public fireworks display.

Don't try it at home: The RSPCA advises that Bonfire Night can be a source of fear for animals, so best to keep them safe at home until they are trained secret agents.

The firework scene: "Don't let him blow up your train!" Joe (Joel Courtney) is warned about his firework-mad FX whizz Cary (Ryan Lee). But he lets him do it anyway.

Don't try it at home: If you absolutely insist on letting your friend destroy your stuff, it's only fair they give you something of theirs to smash up in return.

The firework scene: Reckon you know what's going to happen when a pile of fireworks ignites near a group of death-avoiding teens? Guess again.

Don't try it at home: The fireworks miss their targets but hit a cherry picker, which falls on hapless Ian (Kris Lemche). Death has a sense of humour.