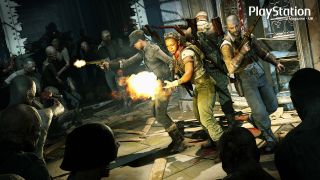 We've fought our way through a heavily defended bunker. The undead lay in pieces behind us, and ahead is the open space of a tank graveyard. Smashed armour and the carcasses of the Nazi war machines are piled high. What can possibly go wrong as we make our way to the level's exit? Oh, it's a zombie tank – but of corpse... You read that correctly. It's a zombie tank. And no on-screen character treats this as weird, and frankly we and our teammates are equally at ease with taking down an undead tank that's spilling zombies from its rotten bowels as it trundles past. Zombie Army 4 is playing by its own rules, and its brand of schlocky arcade horror never fails to raise a smile.

To kill the tank of the dead we need to work as a team. Chatting regularly we guide one another to supply drops and machine gun posts, and communicate the 'creature's' weak spot. We're in arcade heaven so it's a glowing red zone. Whittling it away reveals the tank's beating heart. Upon death it crunches down into a square of scrap metal and bloody innards. It's very silly, and incredibly fun.

Poaching its control setup from the excellent Sniper Elite 4, this zombie-shooter is instantly accessible. Who takes a sniper rifle to a horde shoot? Karl Fairburne does, and it works perfectly. Picking off enemies from a distance is satisfying, particularly as the game adapts Sniper Elite's bullet cam to now enable dismemberment – headshots are a given, but targeting a zombie's legs will see it drop and drag itself across the ground. Given how the undead come in many shapes and sizes, this gratifying ability to target enemies in specific ways opens up tactical possibilities. Shooting a heavy's helmet will pop it off, enabling a clear headshot. Suicide zombies can be picked out in a crowd, the resulting explosion taking out multiple shambling enemies in one go.

When the undead get close we turn to our machine gun or shotgun for crowd control. Better still, you can set traps in the environment to keep the horde at bay. In the campaign missions, which take us across 1946 Europe, including Venice and Pompeii, these feel cinematic and somewhat scripted; in Horde mode they take on a more strategic value. Freed from the narrow push of the story, the arcade purity of Horde mode (where we need to clear waves of zombies across four maps) enables us to make use of traps as we wish. Activating an under-repair propeller engine sucks in zombies and spits out body parts. Loudspeakers play zombie Hitler's speeches, luring the horde towards the unwise words of their undead leader, enabling us to create a killzone to pick them off at ease.

As we rack up kills and points we rise through the game's 100 ranks to earn new Perks, melee attacks, and special weapon attachments. These range from an electrical punch that can stagger groups of zombies to elemental buffs for guns. Linking kills will activate these and other abilities. We particularly love the armour piercing mod that draws a red crosshair over an enemy, zeroes in, and takes them apart in one shot. Then there's the revolver's Brain Buster move, which targets six zombies and shoots them all in their heads with one dab of [R2].

Perks are passive abilities that come into their own in the heat of battle. Ranging from the ability to return to the fray by shooting zombies – every shot refills your health – to dealing extra damage and group healing, each Perk can help turn a fight, particularly if you work as a team.

We're back in Horde mode and putting everything we've unlocked and learned to good use. Crowding onto the roof of a half-destroyed farmhouse we can pick-off zombies from distance. Heavies are easy to target from afar but Creepers – fast-moving wall- crawlers – are harder to fend off without a supply- dropped machine gun. We'd used our pre-wave time to set traps to hold them back. An electrical tripwire is spread out in front and stalls the Creepers, giving us time to mop them up. Mines laid at entrances offer protection. Even this preparation can't hold off the horde for long, and as our traps dwindle we run in all directions. It's a mistake that is our downfall, and proves Zombie Army 4 is at its best when everyone plays as a team. One by one we're picked off. Cornered by a buzz-saw wielding Heavy, overrun by Creepers, and dragged into our own propeller trap, only one player is left alive... the odds aren't good.