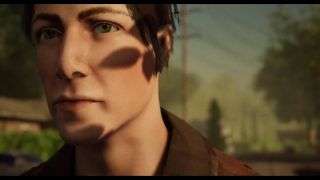 Let me tell you a little about Falling Sky, because you’ve never heard of it. It’s a third-person mystery game in the style of Heavy Rain and Deadly Premonition, set in a fictional town in a faceless American suburb. The core story follows Daniel and his young brother Tommy, who set out to find out the truth behind their mother’s disappearance. It features a fully mo-capped cast, using actors who appeared in Horizon: Zero Dawn, Dark Souls, and Dragon Age Inquisition, a fully explorable fictional town, and hundreds of lines of recorded dialogue. It has been nominated for an award at The Game Awards this week. Oh yeah, and it was made by a single person. A student, actually.

Jonathan Nielssen is a student at the National Film and TV School in the UK, attending the Game Development course. He also lists himself as the Director and Developer of Falling Sky, as well as the Animator, Character Designer, Environment Artist, Programmer, AI Programmer, UI Designer, and Technical Artist… phew. Sure, several other people have assumed roles around Falling Sky via scriptwriting, production, marketing etc, but the core creation and execution is purely Jonathan’s remit. What he’s achieved with his project in under 12 months - from concept to the current, snapshot version - is phenomenal. “It was intentionally too ambitious,” Nielssen tells me, during an interview ahead of the Game Awards. “The benefit of developing a student game is that you have freedom to experiment with whatever you want, which is a big part of what you pay for. You don’t necessarily need to sell your game so I just wanted to scope it out and see how far it can get.”

While the game has inevitably changed over the single year he has been working on it, Falling Sky remains true to the original concept that Nielssen first envisioned when he started his course. “I wanted to blend Legend of Zelda and Twin Peaks into a game. I really wanted to create a narrative-led game that mixes in elements of open-world adventure and point-and-click titles,” he explains. The end result is very much that, albeit with fewer Bokoblins and more suspicious, small-town-American residents. The ambition shown in this project is frankly astonishing, and either by good fortune or prescient design, the story is very much on trend too, with the return of Twin Peaks earlier in 2017, and The Mist, bringing the small town mystery back into focus.

However, the desire to tell a story around these very TV-centric concepts was an initial problem for Jonathan. As with almost all major, AAA games, the evolution of Falling Sky was a difficult one and the project was in danger of being derailed before it even began. “The lowest point was at the beginning when we struggled with getting the story right,” he explains. “We tried at first to write out the story and then make the game, much like a film would be first written and then shot. Mohsen (Screenwriter), Nikolay Savov (Producer) and I had many meetings and discussions. However, we couldn’t figure out how exactly the gameplay would fit in our initial idea and it just did not feel right. Two months into the development process with every other student having a clear objective, we had to scrap our plans and start from scratch with whatever assets we had built already and what we felt we can create on time.”

Losing two months of work would be a challenge for a development team of 50, with a three year period to create their game. For a single student with less than a year to create a project that could launch or stifle their career, it was undoubtedly a serious blow. As such, Jonathan decided to work on the characters and the environments while the actual story and gameplay elements were figured out. One of the few luxuries of having such an ambitious, narrative driven game, is that the characters are a core pillar of the experience, so they’d always require a certain portion of development time anyway. And they have, undoubtedly, influenced the overarching plot too, by their very design.

Game makers often fall into the trap of trying to emulate movies (or the movie making process), before realising that truly great video games are very much their own, unique thing. While many will learn the mistakes and work-arounds by working in a studio, or from the teachings of other, more experienced developers, Jonathan had to rely on theory, smarts, and trial and error. And although his learning curve was undoubtedly steeper than many, the personal highs of figuring it all out are more gratifying. He recalls that: “I can’t remember having a ‘Eureka!’ moment, specifically. Truth is, I realised we had something great once we were putting the motion capture data on the characters, and seeing that the pipeline worked and all the technical bits fell into place after so many months of work was downright exhilarating. I remember that moment in the middle of the night when I thought: “Oh well, it might turn out to be something pretty good”.”

Pretty good is something of an understatement. A short demo of the game was showcased at EGX back in September, and most who played it were incredibly impressed - even if Jonathan himself was initially annoyed that he had to leave much of his work on the cutting-room floor, as it simply wasn’t polished enough to show. “I had a lot of extra scenes, which are all done in mo-cap, the characters are done and animated but in order to make a cohesive ten-minute demo I had to leave a large chunk of the story out,” he says. “Luckily, it turned out that the length was just about right for EGX.” The game garnered not only positive reactions from the public, but also the nod of approval from leading media outlets that visited the show. Both Eurogamer and The Guardian listed Falling Sky as one of their best games of the show.

Perhaps that’s what lead to the nomination for a Game Award, where Falling Sky is competing in the Best Student Game category. “It felt amazing to receive the news about the nomination,” Jonathan says. “It took me by surprise in a moment when it was much needed: when I was chain drinking my coffee and writing my dissertation”.

The journey, not the destination

To have come so far in such a short space of time really is remarkable, and while Jonathan himself is so obviously a future gaming talent, it really does speak to the quality of student and smaller independent games being made in 2017. Falling Sky may be ambitious and striking, but it’s by no means unique in its ambition, and the other projects I see during my visit to the National Film and TV School are similarly creative and aspirational. With the tools for creating video games of all shapes and sizes becoming increasingly available and affordable, and the avenues into development opening up, the gap between what we think of as ‘proper, big budget’ games and ‘smaller, independent or student’ games has never been narrower. It’s increasingly about the creativity and ideas of those who make them - or aspire to do so - that truly matters.

And it’s that last point that really inspired me to write this feature. This isn’t about Falling Sky, as the game itself may never actually be released, despite huge potential. Jonathan himself admits that: “I’m planning to team up with Producer, Nikolay Savov and make some great games. Our future company is in the works at the moment. The plan and strategy behind making a demo was to show what we were capable of and also to keep open our potential for future investors. Where the game stands now is a very good place for a lot of opportunities, whether I continue with Falling Sky towards the avenues of commercial development or it becomes a portfolio piece to get funding for an entirely new project.”

Regardless of the game’s - or indeed, Jonathan’s - future, it serves as an inspirational story to not only those who dismiss student or indie games as lower-tier, but also to anyone looking to try their hand at game creation themselves. While Falling Sky’s journey is remarkable, and whether or not it wins at the Game Awards, it’s an example of what is possible when a creative follows their ambitions. “You need something that will keep you captivated and focused at all times, so find something that has a meaning to you, rather than only doing what is expected of you,” suggests Jonathan, as a parting piece of advice for anyone interested in making games themselves. “Be led by curiosity, always”. In an industry often at war with itself over loot boxes, budgets, and the constant tension created by knotty issues like representation, extreme violence, and dark themes… the idea of being lead by curiosity is a refreshing reminder of why we love games to begin with. And, ultimately, being true to that is the real secret to Jonathan’s success.