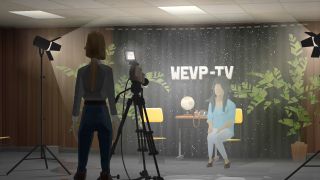 The wait is over. Kentucky Route Zero's Act V is releasing alongside its console edition on Tuesday, January 28, drawing a close to a story that started seven years ago in 2013.

Kentucky Route Zero: TV Edition, which includes all five acts (and its intervening "interludes") of the cerebral point-and-click adventure from developer Cardboard Computer, will release on PC, PS4, Xbox One, and Nintendo Switch later this month, and represents the definitive version of the critically acclaimed indie title.

Check out the full trailer for the game below:

The TV Edition's new website includes fresh screens for the game, which provide a small glimpse into Kentucky Route Zero's final Act, alongside more information about what to expect from those who haven't yet played the ongoing adventure.

Those who own the PC edition of the game will automatically have access to Act 5 on the same day of Kentucky Route Zero: TV Edition, which itself includes the season pass for every Act and Interlude so far.

As it happens, we rated Kentucky Route Zero as one of our favourite best games of the decade just gone, so to usher in the new decade by bringing its magical realist story to an end is certainly a great way to kick off 2020.