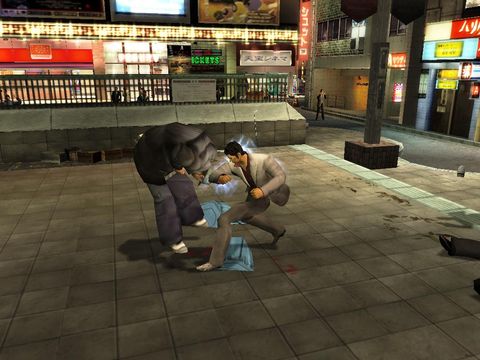 There have been games that told a story well. There have been too many games that let you beat the hell out of thugs. And, yes, ever since Grand Theft Auto rocked our world, there has been a spate of hard-talking main characters and gritty cities to wreak havoc in. But so far, there hasn't been a game quite like Yakuza, and Yakuza is, for all its faults, reliably intense.

A lot of the time reviewers say "the game casts you as..." when referring to the main character. That's not Yakuza. This is the story of Japanese mobster Kazuma Kiryu. Fresh out of a ten-year stint in the can - after taking the rap for a murder he didn't commit - he cruises the same Tokyo streets he'd lorded over when he'd been on the top of his game.

This is fundamentally Kiryu's story; you're along for the ride. Somehow, you won't be complaining. The game is packed with other interesting characters, too; some are predictable by nature, but the story is so full of murder and mayhem it takes them all exciting places. This is the first game in years, maybe, where you'll be eager for the next cutscene - the story is that gripping.

It doesn't hurt that Kiryu is one of the best main characters we've seen. Clever, violent, cunning, desperate, honorable... a badass you can respect. Though set in contemporary Japan, the game is dubbed into English - and it works. Kiryu, particularly, breathes out a low-key menace... but when there's real drama, he's just as convincing.