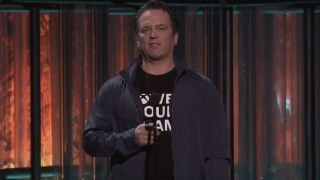 In order to prevent any leaks ahead of the official reveal of the Xbox Series X, Phil Spencer was given a fake script about the Xbox Game Pass during rehearsals for the Game Awards 2019. In a phone interview with Variety, The Game Awards host and executive producer Geoff Keighley said Spencer "read a phoney script" to prevent anyone learning about the upcoming console.

Historically, leaks have a habit of surfacing when it comes to big announcements. Whether it be a blurry photo of merchandise appearing on forums or prototypes popping up online, you can understand why these kinds of measures were taken to keep Microsoft's next-gen console under wraps.

The Xbox Series X was easily one of the show's biggest announcements, and it was the first time the world had gotten a glimpse of the PC tower-esque console since Microsoft announced it was set to release the console - codenamed Project Scarlett - in holiday 2020 during E3 2019. It was a big showcase for Xbox overall, with reveals of titles like Senua's Saga: Hellblade 2 and teases of other upcoming Xbox Series X games like Halo Infinite.

A flurry of information was also released after the big reveal of the new console, with Microsoft clarifying it would have backwards compatibility support and that the Series X is actually just one of the Microsoft's next-gen consoles and Series X isn't the  the only name. It is a little confusing at first, especially with the Xbox One X. Still, the next-gen console we've seen has certainly got us excited about the future of Xbox, and thanks to Microsoft's efforts, the reveal came as quite a surprise.

Take a look back at the past 10 years with our pick of the 100 best games of the decade, or check our video below.