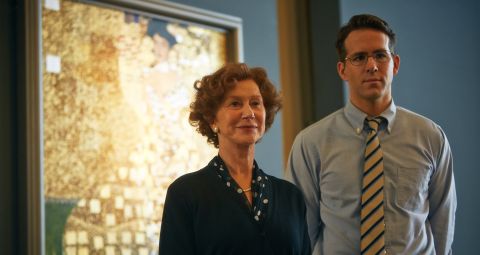 A plodding, predictable script hampers this tale of a real-life legal battle. But it’s redeemed by a vital central performance – and some vivid flashbacks.

Even if you’re unfamiliar with the real-life story behind Simon Curtis’ film – it’s already been the subject of a brace of documentaries – of an octogenarian Vienna-born Jewish woman who sued the Austrian government for restitution of paintings stolen from her family by the Nazis, you’ll see pretty well every twist of the plot coming. This is screenwriting by numbers, so formulaic you could set your watch by it.

Also it stars Helen Mirren, who really isn’t anyone’s idea of a loser. Even when, as here, she’s playing a woman 10 years older than herself, her sheer unconquerable vitality leaps off the screen. As Maria Altmann, the claimant in question, she gives a spirited turn, leaving the rest of the cast – including Ryan Reynolds as Randy Schoenberg, the young tyro lawyer who takes on her case – gasping in her wake.

Not that her co-stars are negligible: Daniel Brühl, as the Austrian journalist who offers his help, and Tatiana Maslany as the young Maria, do sterling work. But what makes WIG consistently and often grippingly watchable, for all the clunking plot-work, are the flashbacks to 1938 Vienna, year of the Anschluss, when Nazi troops marched into Austria. We’re reminded, as is often forgotten, that Austria’s treatment of its Jewish population ceded nothing in cruelty and degradation to Germany’s.

These vividly-staged flashbacks serve to leaven the drier modern-day courtroom scenes and provide the moral bedrock underlying Maria’s campaign. And when towards the end we see the young Maria about to make a precarious bid for freedom with her husband, you may well be moved to tears.

A plodding, predictable script hampers this tale of a real-life legal battle. But it’s redeemed by a vital central performance – and some vivid flashbacks.