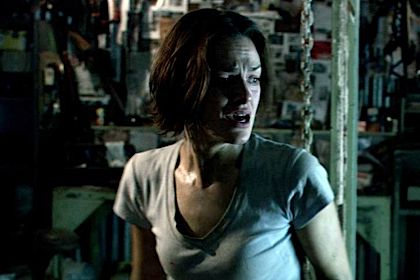 But for all the obvious parallels, and as much as director Greg McClean cites another classic shocker, Picnic At Hanging Rock, as his primary inspiration, it is, in fact, another ‘based on real events’ masterpiece to which he owes his main debt. Just as Tobe Hooper riffed on Ed Gein’s dubious domestic situation in The Texas Chain Saw Massacre, McClean likewise takes a gruesome true-life tale and runs with it to savage, if factually economic, success.

Part Peter Falconio case (the British tourist who was apparently killed on an outback highway in 2002), part the infamous Hume Highway backpacker murders committed by Ivan Milat in the early ’90s, McClean’s screenplay is a sparse, unrelenting machine, brutal in its efficiency. The first-time feature director claims that he wanted to create something “quick, easy to bang out” but admirably there’s nothing rushed about his set-up. Calm and assured, the slow build – mirroring The Hills Have Eyes in its eerie intensity – establishes a mood of dread and unease that lets up only as it’s unleashed in a ferocious climax of torrential guts and sinew.

And it’s here that McClean really cuts loose. An ardent follower of the horror heyday of the late ’70s and early ’80s, as well as a furious campaigner against the genre’s recent pussy-footed anaemia, his second half of wild violence is a blood-red nirvana for hardcore fans.

Suffice it to say that if Switchblade Romance held its head back and The Descent sharpened the steel then it’s Wolf Creek that delivers the final, fatal, throat-slit to the post-modern malaise. No more Mr Wise-ass here: this is horror for those who like it clean and pure.

A misjudged coda leaves an unnecessary aftertaste and certain plot contrivances stretch both budget and plausibility to their elastic limit, but the performances from an amiable cast of relative newcomers (Jarrat’s superb regular player aside) never let the momentum drift. Unlike Blair Witch’s nasally-incontinent Heather and her pair of puppy-dog compadres, these are kids to actually root for, especially when things go so bad (and, trust us, they really do) you can barely look.

In even better news, unlike Blair Witch directors Eduardo Sanchez and Daniel Myrick, who mistakenly thought their golden-boy status would translate into Hollywood happily stumping up the cash for whatever nonsense they proposed as their follow-up (a romantic comedy, indeed), McClean claims that his next project is in the same vein. Good job, too. Having turned in this year’s horror phenomenon, it’d be a shame to lose him.