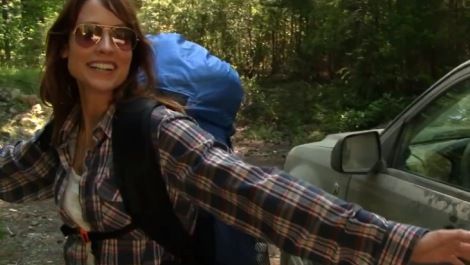 Just when you thought it was safe to go back in the woods – or, more likely, just when you thought you couldn’t stand one more found-footage film set in the woods – along comes Bobcat Goldthwait ( World’s Greatest Dad , God Bless America ) with a scruffy little mockumentary to scare your cynicism away. What’s even more surprising is that it’s so very charming, with chuckle following chuckle as we meet the oddball characters (real locals, mainly) that populate the titular home of Bigfoot and the schlocky tourist trade that pumps lifeblood into the community.

Jim (Bryce Johnson) is a Sasquatch nut. Dragging his girlfriend Kelly (Alexie Gilmore) to the North Californian town of Willow Creek, he sets about interviewing the natives for a YouTube documentary. With footage bagged and a ginormous Bigfoot Burger snaffled (toes and all), he then insists Kelly accompany him as he re-tracks the route taken in the (in)famous Patterson-Gimlin film – considered the holy grail of Bigfoot recordings. Night falls and the tone begins to darken…

As in The Blair Witch Project , Willow Creek ’s terror tactics are all about what you don’t see, while the source of the chills is kept ambiguous: over-active imagination, pissed-off locals or honest-to-God beastie? What is for sure is that a DIY movie that has just 67 cuts culminates in a 19-minute static take that is damn-near unbearable to watch; the actors’ genuine fear (also like Blair Witch , they didn’t have a clue what was coming) proving all too infectious.

If you like subtext with your scares, there’s plenty here to chew on, with the real fear on display (perhaps) being Jim’s terror of commitment, which (arguably) manifests itself in alarmingly oedipal form. The truth, like Bigfoot himself, is a slippery beast that will take a different form in each viewer’s mind. But whatever your theory, Willow Creek is a movie to believe in.