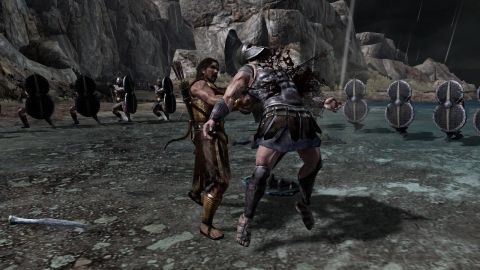 Tecmo Koei’s big-in-Japan Dynasty Warriors series has been spawning sequels and spin-offs for over a decade. From Samurai Warriors to Dynasty Warriors: Gundam, fans of the thumb-blistering franchise have had ample opportunity to pile enemy corpses like cord wood. While the settings and stories have slightly changed with each entry, the core Warriors’ combat has rarely strayed far from its hack-and-slash-heavy roots. In a bid to attract a broader audience, Koei Canada’s Warriors: Legends of Troy gives the series a sword-and-sandal makeover while injecting some strategy into its button-mashing battles.

Based on the Trojan War, Troy’s dual-perspective campaign puts players behind the bulky shields and sharp steel of heroes on both sides of the conflict. Legends of Greek literature, such as Achilles, Paris, Ajax and Penthesilea fill the roster, each bringing unique moves and weapons to the battlefield. Ajax, for example, relies on his oversized shield to keep baddies at bay, while Penthesilea uses a battle axe to thin the horde. While utilizing these different characters’ specific death-dealing tactics adds some welcome variety, Troy’s combat still feels repetitive and shallow. Regardless of whose sandals you’re occupying, success is ultimately scored by hammering on the face buttons; mindlessly executing light and heavy attacks - and various combinations thereof - will almost always leave a trail of corpses in your wake.

Some tougher battles with mini-bosses and even bigger, level-capping baddies do encourage a bit more strategy, so blocking, parrying and evading abilities won’t go entirely unused. And it’s admittedly satisfying to swiftly avoid a hulking enemy’s earth-rattling attack just before opening his jugular. Additionally, beating back swarms of low-level soldiers, while simultaneously trying to introduce some mouth-breathing meat-bag to the dirt, offers a glimpse of Troy‘s potential. Other features include the ability to pick up dropped weapons and use them on their owners - shish-ka-bobbing someone with their own spear is a highlight - and the power to finish enemies in cinematic style with a press of a button.

Players also manage a “Fury” gauge, which is filled by successfully stringing together attacks; once full, it can be unleashed to stun enemies, slow time and add a bit more muscle to attacks. In-game currency, dubbed Kleos, is also earned in battle and spent between levels on new combos and passive upgrades such as increased health. However, while these refinements show real promise of evolving Dynasty Warriors’ mindless mechanics, they’re sadly outshined by too-long stretches of button-spamming action. It doesn’t help that when not butchering baddies, you’re trying to complete tedious protection and escort tasks - keeping a battering ram from becoming kindling for the opposing army’s fire is especially frustrating.

While Troy’s combat won’t feel particularly foreign to fans of the Warriors franchise, its setting and narrative offer a refreshing departure from the Three Kingdoms and Feudal Japan focus of previous games. It won’t exactly replace Homer’s Iliad, but its cutscenes and varying character perspectives do provide an engaging interactive take on the source material. The audio and visual presentation won’t blow you away - well, unless maybe you’re comparing it to a last-gen game, but at least we’re not fighting as emo-spouting pretty boys for a change. Even better, especially for fans of gore-fueled films like 300, Troy introduces blood to the decade-old franchise. Slo-mo trails spew from enemies’ chests and necks, and the screen is liberally splashed with the red plasma when in “Fury” mode.

Grisly kills, a fresh setting, and some new combat mechanics might not be enough to convince newcomers, but Troy should satisfy those who fell in love with the series back when they were tethered to a PS2. We fall in the middle of the two camps and found Troy a welcome, but ultimately underwhelming attempt to evolve the franchise beyond its thumb-numbing roots. If Koei Canada can further refine the combat, add some multi-player - this game screams for co-op - and polish up the presentation, we’re willing to plunge our bloody sword into a sequel.