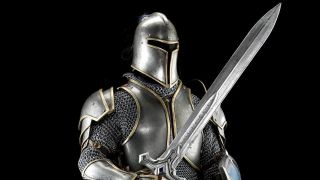 Aside from cleaning up in the international box office, the Warcraft movie's greatest legacy may be making Alliance and Horde cosplay super easy for savvy shoppers. Prop Store just opened up a new online auction lot of nearly 500 authentic items used in the filming of Warcraft: The Beginning from now through July 12. Bidding starts at $50 for items like aluminum or urethane swords and shields, as well as full suits of seen-on-screen armor. Even if you've never seen the movie, there's plenty of familiar designs to tempt any given Warcraft fan.

For starters, here's a full set of Alliance Foot Soldier armor complete with sword and shield, all with a current bid of $75 as of this writing. Want to cosplay as a Stormwind Guard at your next convention? Done. Just remember that you still have to pay for shipping too, and it probably won't be cheap.

Prefer something you could hang on the wall and potentially use to scare off home invaders? How about this Dark Elven Glaive? Sure, it never actually appeared in the final version of the film (I'm starting to understand why the Warcraft movie had such a huge budget) but it still looks pretty cool.

Or if you want to cosplay as a heat-packing hunter, this meaty Alliance Hand Cannon will do the trick. The axe-head bayonet reminds me of the dwarf hunter from the original cinematic trailer for World of Warcraft.

Finally, if you want a more low-key way to show your Warcraft love, there's this rad map of Azeroth that's begging to be framed. The movie version of the continent moves things around a little bit, but it's still surprisingly close to its World of Warcraft counterpart. It even has quaint little details like the village of Moonbrook in the south of Westfall, the future home to the Deadmines instance.

See how Warcraft ranks in our list of the best video game movies of all time, or look ahead at what's big in games and entertainment this week with our latest Release Radar video.