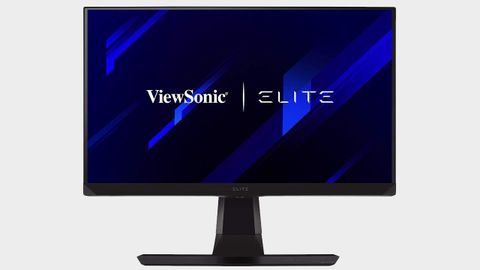 A stunning panel for almost every PC gaming need, but not a good match for console gaming

Another day, another pretty pricey gaming monitor. But stay tuned, because the new ViewSonic Elite XG270QG is something a little bit special. It doesn’t qualify as the most cutting edge gaming monitor on the market in every regard, but it does have a mix of features that absolutely nail the sweet spot for PC gaming here in late 2019. Just note, console gamers will not find the XG270QG a good match for their needs for reasons we’ll come to momentarily.

It’s a 27-inch 1440p model. In other words, it’s not 4K. For most games, that’s demonstrably a good thing: driving a 4K monitor at really slick frame rates in modern games is a total non starter unless you have £1,000 / $1,000-plus worth of graphics hardware. The XG270QG also supports refresh rates up to 165Hz and Nvidia’s G-Sync adaptive sync technology. Oh, and claims to have a 1ms response. Par for the course so far? Yup, but to that ViewSonic adds 98 per cent support for the DCI-P3 colour space courtesy of a so-called nano-IPS panel. Combining response rate that fast with the superior colour accuracy of IPS panel technology is a recent innovation and makes the XG270QG a very exciting prospect indeed. All that said, the XG270QG conspicuously lacks one obvious feature: HDR support.

The new Viewsonic Elite XG270QG isn’t exactly a head turner for pure design. The aesthetic is unrelentingly black and largely minimalist save for the RGB LEDs integrated into the bottom of the display and a further hexagonal ring of RGB LEDs on the rear. However, thanks to slim bezels up top and either side, it’s certainly fresh and contemporary. At least, that is, until you fit the ‘Sight Shields’ to the sides of the display. These are similar to the hoods found on high-end professional monitors. In that context, an upper shield is also included and the overall idea is to reduce ambient light hitting the display. For gaming - and given there’s no top shield - the upside is less obvious. If you’re using this monitor at home and alone, blocking the view from either side is surely an irrelevance. Still, the XG270QG offers good build quality and plenty of adjustment including being put into portrait mode.

Residing within those slim bezels is the main event: the 27-inch IPS panel. With 2,560 by 1,440 pixels, it hits the sweet spot for current PC gaming. It’s the perfect compromise between detail and performance. 1080p lacks the former, while 4K has too costly an impact on the latter.

Of course, there are plenty of 1440p gaming panels out there, including many that can match the XG270QG’s 165Hz refresh, Nvidia G-Sync adaptive sync and 1ms response capabilities. What few can do, however, is combine all that will a highly colour-accurate IPS panel and with that 98 per cent of the DCI-P3 colour space. DCI-P3, for the uninitiated, is the prevailing colour space for digital cinema and is quickly becoming the gold standard for displays. It’s a pretty demanding standard, to boot, so 98 per cent compliance is excellent, especially for a gaming monitor where accuracy often isn’t stellar. All that said, what the XG270QG conspicuously lacks is HDR support, a fact belied by its 350cd/m2 max brightness and 1,000:1 static contrast. Not bad numbers, but clearly not the stuff of HDR visuals.

Elsewhere, you get DisplayPort and HDMI inputs, but no USB Type-C, which is a pity. It’s also worth noting that the HDMI port is 1.4 spec, limiting refresh to 60Hz. Long story short, to benefit from the XG270QG’s full range of refresh rate capability, you’ll need to hook it up via DisplayPort. On a similar subject, note that it’s not possible to drive this display at native resolution via current gaming consoles. Put simply, the XG270QG doesn’t make sense as a console display.

Out of the box, the XG270QG looks absolutely great: colours really pop while maintaining precision and realism. Likewise, the viewing angles are outstanding. All this you’d expect from any modern monitor with an IPS panel. Where things diverge from expectations - and absolutely for the better - comes when you fire up the games. That they look rich and sharp and vibrant and detailed isn’t a surprise. But the speed and response is genuinely extraordinary for an IPS panel.

Combined with the 165Hz refresh and those IPS-powered colours, the net result is a spectacular gaming experience. Frankly, it doesn’t really matter what kind of gaming is your bag. Apex Legends really pops with colour and absolutely zings with pace and response. Assassin's Creed Odyssey and The Witcher III look lustrous. Any strategy game you care to mention is a delight. Really, there are few limitations to the gaming prowess of this screen. Strictly speaking, if you aspire to go pro playing an online shooter like, say, CS: GO, you’re still going to want a TN panel and over 200Hz refresh. But short of that, this panel has you covered and then some.

It’s not exactly cheap, however, compared to the latest 27-inch 4K high refresh IPS panels, all of which get well into four figures price wise, the XG270QG represents a significant saving. And it almost certainly delivers a better experience. It gives little or nothing away in non-HDR content when it comes to colours and general image quality, and it has even better speed and response. Likewise, the lower resolution makes for better frame rates. That’s really what marks this monitor out. That combination of outstanding speed with IPS image quality. It’s very special indeed.

The downsides, ultimately, are few. USB-C would add to the XG270QG’s usability, especially if you want to hook it up to a gaming laptop. The Sight Shields are arguably a bit silly, but then you don’t have to fit them. It also makes little sense as a console screen. Ultimately, our only real reservation is that the price is still pretty high. That’s a market-wide issue, not something specific to this Viewsonic. But it will limit who can access this screen’s many qualities.

A stunning panel for almost every PC gaming need, but not a good match for console gaming