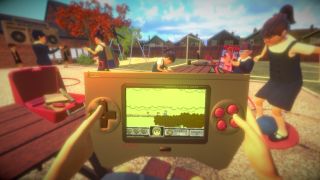 Sony is betting big on PS VR this year with over 60 new games promised in 2018. The PS4 headset sold almost twice as much as expected last year, which means even more games are on the way. It's a mixed though (isn't it always) which is why we've picked out the most promising looking things coming up in the next few months.

Take a look at what's coming in this list and, if you want something now, we've also got the best PlayStation VR games that are already out.

This is a racer with a twist in that you're running - both in the game and (sort of) in the real world. Using two Move controllers you wave your arms like you're running to build speed, as well as using various gestures to steer and aim around you. While there are single player courses and challenges, the real point are the eight player races which look a lot like Wipeout, only on foot.

A standout surprise from the PS VR sizzle reel shown during Sony's E3 2017 press conference, Moss looks like a captivating fantasy adventure starring an adorable, gauntlet-wearing mouse knight. Rather than playing directly as our mouse hero Quill, you're an enchanted orb of energy bonded to the mouse, guiding her through ancient, overgrown ruins and magically manipulating the environment to open up new pathways. Moss' world is absolutely gorgeous, and the satisfyingly familiar gameplay of this action adventure is the perfect match for the wonderful setting.

This is a 3D painting program that lets you slap ink about in the space around you using Move controllers. Because you're basically painting in the air in three dimensions its as much a sculpture tool as it is for flat art. Your brush strokes hang where you leave them, letting you build up shapes and layers in order to create an image. Mirror tools make things like profiles and faces easier, while you can move, manipulate and zoom around your creation to add in the fine details.

All we know about this one is that you play as a sick child able to control golem-like creatures. You start small, exploring your bedroom with tiny figures but eventually graduate to a 15-foot stomper wandering an ancient city you have some mysterious connection to. We've only had a trailer so far but there's some encouraging talent involved including Jaime Griesemer, a game Designer on Halo, Destiny and Infamous Second Son, and Marty O’Donnell, the award-winning composer behind Halo and Destiny. It's also promising some "innovative VR controls" which is a bold claim.

Welcome. To Jurassi... Ark Park. Ark Park, not Jurassic. It's got dinosaurs in a theme park setting but is absolutely no relation. What it is related to, is survival crafting game Ark: Survival Evolved. This spin off is a little less about hiding in huts trying not to die, and more about a big lizardy petting zoo. You can explore, collect and unlock creatures to look at, and bring in any dinosaurs you own in Survival Evolved look at. I mean, it is basically Jurassic Park VR, just don't tell anyone and you'll get to give a T-Rex scritches on the nose.

Ubisoft's announcement of a VR game developed in part by Lord of the Rings star Elijah Wood came as quite the surprise, but definitely the good kind. Transference seems like it'll be less of a game and more like an interactive movie that tries to get under your skin and deeply unsettle you, maybe to the point that you're scared to put your PS VR headset on. Details are still hazy, but it sounds like you'll be a guinea pig for tests involving downloaded brain data, forced to experience some traumatic, downright freaky memories.

Basically, Call of Duty VR, Alvo is an online team-based 5v5 multiplayer army shooter. Match types include things like Search and Destroy, where you plant/defuse bombs, a free for all options, and a territory controlling Domination mode. It'll use the Aim controller which promises to make for a fun experience. It's also got cross platform support between PSVR, Vive and Oculus, so finding people to virtually shoot shouldn't be a problem.

There's a strong Minecraft look here thanks to that chunky block rendering. But where that game has you building worlds one brick at a time, this uses the Move controllers to paint mountains and landscapes into existence from raw voxels. Not only can you sculpt and create worlds in 3D space with friends, you can then go into what you've made and fly around with them.

This is something a little different: a turn-based strategy game that uses PS VR to let you look over the proceedings like it's a table top game. (It's based on an actual table top game called “This Quar’s War.”) You've got 18 different units to move around, from soldiers through to armoured tractors, as well as a home base to expand and improve. While the focus of the gameplay is its turn-based combat, you'll also be able to shrink down to soldier size and see the action from that perspective.

Finally, the chance to get punched by an octopus in a boxing ring. Don't say you haven't thought about it. This fighting game uses Move controllers to let you trade blows with a range of opponents, from more normal human people to the slightly outlandish. As well as competing in the ring there are training sessions, mini games and other activities all build out of the medium of hitting things as hard as you can. Make sure you clear some space before you start swinging.

Once you start getting into game-within-a-game territory, you know things are going to get weird. Pixel Ripped 1989 mixes a double layer of gaming as Nicola plays a series of games, from 2D retro consoles through to 3D stuff. Not only are you playing a game inside another game, but the things you're playing can escape out in the 'real' world, so that you end up controlling the character as it jumps around your desk battling enemies.

Less a game, more an experience and that experience is getting drunk and attacking people in a bar. So part boxing sim, part ramshackle reason to flail in people's faces and knock back too many beers. It's more a Goat Simulator affair too - less a game, and more glitchy, toy box to play with friends around for the lols. You can swear, throw bottles and generally wreck the joint without fear of arrest.

Doom VFR has proved that fast paced shooters can work in virtual reality. Gunheart is in that vein with a movement system that mixes in normal motion and teleporting to let you and two friends fight a range of enemies. This features extensive customisation as you unlock new gear and guns to mix and match with your team, creating a wide range of action as you try out new toys across different levels.

Developer: From the Future
Release date: 2018

If you can't wait for Red Dead Redemption 2 then... you probably should. This is a cowboy game but not one that takes itself too seriously as you ride around on hobby horses taking pot shots at felt cowboys with six shooters. There's a lot of exploring wide open levels here, blasting dynamite as you track down a bandit leader called Boss Boomity.

Developer: What Up Games
Release date: 2018

Something a little different here with a basketball sports sim that promises realistic physics simulation as you try to sink hoops. It might look colourful but this is promising authenticity from dribbling, to the actual courts themselves, and with six online game modes. Although you can take it as seriously as you like with the ability to customise and adjust plenty of things - lower hoops make it way easier to play from your chair for example.

You might have heard of Sensible Soccer, it's a really old soccer game from the days before FIFA and PES. Instead of licenses and trick shots it was more about just plain kicks and team positioning. This is basically a spiritual successor from the original designer, Jon Hare. It's more a fast kick-about type of game given a table top feel in VR.

Part shooter, part satire of American gun culture, The American Dream is game about life where everything is achieved via the medium of gunfire. You'll follow a rootin' tootin' US citizen from birth and through their life. That includes things like working in a burger bar (shooting the burgers to flip them), or gardening. With a Tommy Gun. It's basically an arcade shooter but using its settings and activity to poke fun at USA's love of weapons in everyday life.

It's spooky puzzle time with Torn's self proclaimed inspiration including things like The Twilight Zone. The story's not giving much away, only that you have to explore an obviously creepy looking house that used to belong to a doctor. He's been missing for 64 years, but what's left are rooms full of strange experiments and weirdness. You can see where this is going.

Blasters of the Universe

Yes, they went there with the name. However, while this looks initially like a just another VR FPS, it's trying something different by creating a bullet hell shooter. Incoming attacks come in sheets and blocks of enemy fire for you to dodge, or deflect with a shield. It's as much about your ability to avoid being hit as it is accurately taking down enemies with return fire.

As anyone who's played Resident Evil 7 on a PS VR headset can tell you, horror games thrive in VR, so it's heartening (or disheartening, depending on your degree of trepidation) to see another promising frightfest on the way. The scares take place in space, aboard the Persistence research station, where the ship's computer has foolishly attempted to resurrect your dead crewmates following a catastrophic disaster. It sounds a bit like System Shock but in VR with procedural generation, which could make for some pretty terrifying sensations of disorientation.

This sci-fi adventure from the makers of Lucky's Tale is mostly shrouded in mystery at the moment, but the reveal trailer is certainly intriguing. A space explorer makes her way through a neon-lit facility with 2.5D platforming, giving Star Child a similar vibe to Another World. Eventually, she finds and reactivates a colossal robot, who saves her from a vicious-looking alien before taking her up in its massive palm like the Iron Giant.

Supermassive Games seems to be doubling down on PS VR with not one, but two games coming off its successful VR scares in Until Dawn: Rush of Blood. But Bravo Team isn't about psychological horror or terrifying jumpscares - it's embedding you in a fictional Eastern Europe warzone for some stop-and-pop FPS shootouts. The most interesting feature is the online two-player co-op, so you and a buddy can feel like you're actually behind enemy lines as you cover one another and flank your enemies. It also supports the PS VR Aim Controller - good news for all you Farpoint players!