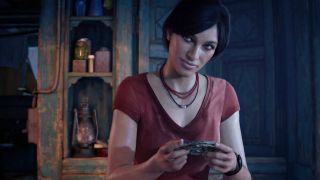 **This feature contains mild spoilers for Uncharted: The Lost Legacy**

Think about female video game icons and one name constantly springs to mind: Lara Croft. Despite fierce competition, as creators increasingly give us more and more relatable heroines, it's the original Tomb Raider who remains the original Lady of Gaming... until now.

Uncharted: The Lost Legacy might have started out life as a simple story DLC pack for Uncharted 4, but it’s now morphed into a standalone game, complete with new protagonist - Chloe Frazer. Gone is the masculine charm and rugged good looks of Nathan Drake, instead replaced with a character that might just be the best game heroine we’ve had in decades (sorry Aloy).

And this isn’t just some flash in the pan idea either. This is coming from someone who used to have Lara Croft posters on her bedroom wall (and no, not because of the hot pants and those triangular appendages) and admires the way she’s been brought back as someone more human and realistically feminine in the reboot series. But there’s plenty about Chloe that makes her the near perfect video game heroine - because no character can be truly perfect, after all.

One of the things that always jarred with me about the 2015 Tomb Raider reboot is that Lara goes from innocent teenager desperately wanting to follow in her father’s explorer footsteps to a dual-pistol-wielding mass murderer, with little more than a few tears and an “oh God, what have I done?”

For Chloe, on the other hand, all of that is old hat. When we meet her first in Uncharted 2: Among Thieves, she’s already a highly experienced and well-known member of the criminal underworld. You already know her backstory if you’ve been immersed in the Uncharted series and The Lost Legacy doesn’t need to waste time dealing with those emotions, which makes for a much stronger character arc than the revamped Lara Croft.

But despite the fact she is a badass, professional thief, Naughty Dog is careful to explore Chloe’s more fragile, sensitive side. But the developer does it in a way that’s entirely human, and not just in one fleeting scene either.

It actually starts right at the beginning of the game. Within the first hour, Chloe is exploring the back streets of an Indian town currently in the midst of warfare. Armed soldiers wander the street, beating civilians as they see fit and forcing others into the backs of trucks or their homes.

She’s looking for a red door someone’s sent her a snap of, but to get there she has to pass through some rather handsy armed guards. The tension in that scene and the obvious fear felt by Chloe is an incredibly interesting way to reintroduce a character. There’s a fragility there that is rarely shown off and such male aggression is unfortunately commonplace (just check out @everydaysexism if you need proof). To put a heroine in such a position is an important reminder that being a lead doesn’t make you invincible and proves that you don’t have to be. Chloe’s early experience doesn’t diminish her as a character in any way, or detract from her strength elsewhere, it only makes her more relatable and more human.

Naughty Dog also uses the camera well to make sure you feel more connected to her in that uncomfortable ‘handsy’ moment, with the entire scene bringing the camera angle tighter into her than anywhere else. It’s still a third-person view, as is the Uncharted norm, but the difference between the camera angle here and later in the game is quite a contrast, leaving me feeling a lot closer to Chloe in that moment.

Although I won’t drop any major spoiler bombs here, there are scenes later in the story that see Chloe dealing with some major personal issues. The fact Naughty Dog doesn’t fear showing Chloe crying later on in the game shows her sensitivity, and when you contrast that against her sass and bravado... it’s incredibly powerful.

And I mean a real woman

I won’t be having any of this “women don’t sweat, they glow” nonsense, and nor will Naughty Dog it seems. As Chloe and partner-in-crime Nadine explore the ruins of India - no doubt in the sweltering heat - you see both of them visibly sweating. Not only are their tops stained with sweat around the neck and under their arms, strands of their long hair get plastered to their skin. It’s a glorious sight to behold as a female gamer - and just a woman generally, actually - because women are usually not allowed to look sweaty in any form of media. It’s not sexy to be sweaty, but it is natural.

Lara Croft on the other hand, in this new reboot series, is definitely a glower, not a shower. She regularly gets caked in mud, covered in blood and looks generally dishevelled, but her hair is always pristine. Chloe constantly feels 100% authentic in her appearance, because you know you’d be sweating in the tropics too.

She’s in touch with her heritage

It’s also a delight that the hero of this story isn’t a white male, but isn’t a white female either. Chloe’s half-Indian, half-Australian and a welcome change to the norm. But Chloe’s heritage goes further than her skin colour, she’s also totally tapped into extensive theology surrounding Hinduism, its Gods, and its rich history. Despite some serious time spent globetrotting in search of the latest mythical something-or-other, she’s full of Hindu knowledge, which gets her and Nadine closer and closer to Ganesh’s lost tusk.

The religious elements, and Chloe’s direct connection to them, only adds to how empowering she is as a character and how believable the story feels - especially in the more emotional scenes.

And the story does go to some dark places, but Chloe is great at bringing humour and a lightness when the going gets tough. In fact, the sassy and sarcastic interchanges between Nadine and Chloe take the jocular dialogue Uncharted is known for up another notch entirely, to the point I found myself regularly chuckling at the hilarity of it all, despite the pair having just survived yet another near-death experience.

Part of that lightness comes from Chloe’s near obsession with taking photographs - but it’s an obsession that’s only paralleled by my own. Every time I found myself accessing The Lost Legacy’s photo, it was just after or just before a prompt popped up for Chloe to take her own photo of the scene.

You wouldn’t see Lara Croft stopping mid tomb raid to whip out her smartphone for a quick pic now, would you? Far too serious. That doesn’t mean to say that I’ve written off old Lara totally. I’ll still love her whenever she returns for a Rise of the Tomb Raider sequel, but there’s a big place in my heart for Chloe Frazer now, the woman who managed to be a hero without losing any of her femininity, personality, or more importantly, vulnerability.

If you’re excited about Uncharted: The Lost Legacy and Chloe, let us know who you think would make a great star for their own Uncharted spin-off.