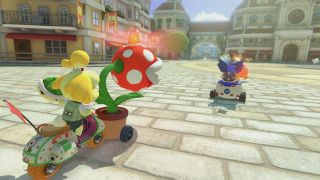 Let’s paint a portrait: Nintendo sold 13.5 million Wii Us before sending the poor tablet controller out to pasture. It sold more than 8 million copies of Mario Kart 8 during that time, an astounding attach rate of 60 percent. If you happen to be one of the Wii U faithful, there’s also a very good chance that you’re the sort of Nintendo fan who was there on day one with Nintendo Switch. For everyone sitting at the center of this peculiar venn diagram, the question stands: if you purchased Mario Kart 8 just three years ago, do you really need to buy it again for Nintendo Switch? Based on an hour with both the classic races and the brand new battle mode at PAX East, there’s no question at all. If you have a Nintendo Switch, Mario Kart 8 Deluxe should be an essential purchase.

Here’s what you’re getting again: all 32 race tracks, 16 from the initial release and 16 from the two DLC expansions that followed, are unlocked from the start in Deluxe. Also unlocked from the outset are all 36 characters from the base game and its DLC. For anyone that loves the long process of adding new faces and curious extra like Pink Gold Peach over the course of racing Grand Prixs over and over, you still have to slowly earn back all the different customizable kart parts. But for anyone frustrated by having to unlock extras in multiple versions of the same game (as with the fighters in Super Smash Bros. for Wii U and 3DS), don’t worry about that here. Even Splatoon’s Squid Girl and Boy, Bowser Junior, and Dry Bones - Deluxe’s four newcomers - are available from the out so you can dive right in with your friends. And that multiplayer access is what makes this such a vital part of the Switch library.

The grand promise of the Switch being a portable, all-inclusive party machine from the console’s first trailer? Deluxe makes that sizzle reel fantasy into reality. Any way you want to play with people, Switch will accommodate. Want to play four-player splitscreen on television like you did back on the N64 days? Do it. Don’t have a TV? You can play four-player splitscreen right on the Switch tablet display. Up to 8 people can play locally using Wi-Fi across as few as four Switches (two people playing splitscreen right on the tablet), but you can even use regular old USB LAN adapters to play flawless, lagless races with up to 12 people locally just like you could at those rare, pristine Gamecube parties with Mario Kart Double Dash (those parties happened, I swear - they were rare, but they were real!). Online play is still available, and you can even play online with a friend sitting on the couch with you, two-player splitscreen against the internet.

Mario Kart 8 Deluxe’s multiplayer just works. You pick something to do, and the game just does it. Nothing impresses in this regard quite as much as how well the Joy-Con controller works for the game. When a Nintendo representative offered us an array of controllers - including a new tiny wheel to house a Joy-Con for motion controls - I specifically requested a plain Joy-Con, one side of a complete Switch. I wanted to see for myself if it would be comfortable; the Joy-Con is an incredibly small device, and I was doubtful it would be as fun to use as Nintendo’s marketing hopped to convince me it was. My dour expectations were entirely unfounded: the Joy-Con felt just right. Hugging corners with the diminutive right trigger, steering with the wee analog stick, tossing items - everything you do in Mario Kart 8 Deluxe feels just right with a simple Joy-Con. If you have a Nintendo Switch and this game, you have a perfect two-player machine at all times that requires no extended setup to get a game going. Which is, frankly, remarkable and the strongest tangible pitch for the machine I’ve experienced firsthand.

The cherry on top the Deluxe sundae: Battle Mode. More than a few people were disappointed that the Wii U release’s combat mode didn’t take place in the closed arenas from past Karts but out on the regular race tracks, and with only the balloon-popping battles included to boot. Deluxe has eight new battle maps, four new ones like the low-gravity Lunar Base and four from old games - and not just Mario Kart since one of the maps is actually from Splatoon - and four additional battle types on top of the old balloon-popping fights. If you dug Shine Runners from Mario Kart Wii, a frantic game of keep-away where racers fight to hold on to a big golden star, that’s back, and it's delightful.

The best of these is the brand new Renegades. It’s a kids' game of cops and robbers, but with weird plumbers and heiresses riding around on motorcycles and mopeds. Half the racers in Renegades have Piranha Plants with police sirens on their heads affixed to the front of their karts. They’re chasing the other half of the crowd, and if the plants reach out and bite them, into a cage they go. The cops are trying to snag all the renegade racers, but the renegade racers can help imprisoned compatriots by hitting switches on the field that open cages and set them free.

It’s the sort of utterly simple, wholly compulsive, uproariously funny competition that’s kept Mario Kart popular for a quarter of a century. Playing Renegades and everything else in Deluxe first thing on Friday morning at PAX East, I changed from a sleepy, cranky dope to a guy demanding one more round from a group of complete strangers. Which is, loathe as I am to admit, precisely what Nintendo said the Switch and its games would do.