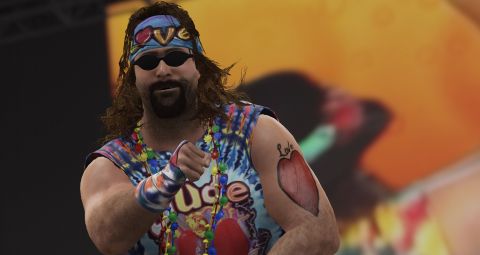 With a huge (and mostly up-to-date) roster, a Stone Cold-obsessed Showcase mode and a fine-tuned MyCareer, the WWE 2K series finally delivers the best wrestling game since Here Comes The Pain.

Following last year’s unexpected heel turn, the WWE 2K series is in dire need of a Daniel Bryan-esque comeback. A severely outdated roster, a meagre selection of match types and a barebones creative suite left fans pining for the glory days of Here Comes The Pain and the original Smackdown Vs Raw. WWE 2K16 might have a few niggles of its own, but it comes together in one of the most rewarding and compelling entries of recent years (while addressing all those issues that made 2K15 such a monumental letdown).

Last year’s entry made the tentative transition towards proper simulation, slowly edging away from the imbalanced arcade elements that had typified the series for so long. It felt more like a UFC game than ever, but there was a real potential there for developer Visual Concepts to give Yuke’s age-old systems a much-needed second wind. WWE 2K16 continues that crusade, adding even more systems to manage and consider - that statement might sound damning but these new changes are finally nailing the drama and athleticism of pro wrestling. Reversals, once abundant and easily spammable, are now a limited resource that gradually replenish over time.

Coupled with the Stamina system reintroduced last year, matches instantly feel more nuanced. The number of reversal slots also differs between each Superstar - of course ‘Big Match’ John Cena has a full set compared to the likes of poor old Dolph Ziggler and Cesaro, but that’s a realistic representation of how things work in WWE right now, so it’s a smart addition.

Adding an economy to your capabilities creates Street Fighter-style bar management that’s endlessly rewarding - you now feel like a proper pro wrestler more than ever, especially if you’re a mid-card crusader taking on a main event heavyweight. More importantly, it demands a change in tactics for different matchups, a requirement that’s largely evaded the series since its inception on PS1. The Chain Wrestling system added in WWE 2K15 and the newly added Working Holds (a similar system that emulates the headlocks and holds used to slow things down in the middle of a match) feel all the more relevant as you balance aggression with a rapidly exhausting body.

Being pinned now has a new more intuitive minigame (stop the cursor within a circular hotspot area), while submissions uses a radial wheel system. Both Superstars have a coloured block (one red, one blue) around the edge of the wheel - the opponent applying the submission needs to overlay their opponent’s block with their own, which will then fill the inner-circle red and force their victim to tap. The defender will need to avoid being harried - survive long enough and it’ll fill blue and escape the hold.

In the ring, WWE 2K16 is a far smoother prospect than previous years. Animations transition together with far less stuttering and almost every Superstar and Diva on the inflated roster has had their character model overhauled. (Finally Seth Rollins has his proper gear and entrance - and yes, the Curb Stomp lives!) Despite the improvements, there are still some odd flaws in the game’s presentation - despite working so hard to emulate WWE programming, WWE 2K16 doesn’t always use the same camera angles (especially on entrances) making it feel more like an adaptation than a true recreation. The new three-man commentary team is nice touch, the addition of JBL bringing another element of authenticity to the mix.

When it comes to the roster, you can dry your eyes and banish the memories of last year’s lean and out-of-date offering. WWE 2K16 offers its biggest roll call yet with over 120 Superstars and Divas (not including the countless era-themed costumes). The developmental territory NXT gets a stronger showing with Finn Balor, Hideo Itami and Baron Corbin just some of the new faces added to the mix. However, the omission of fan favourites Charlotte, Sasha Banks, Bayley and Becky Lynch rankles and with no plans to add them as DLC the Divas division feels a little underrepresented.

Thankfully, almost all the match types dropped from 2K15 return, as do the creation suites (with the exception of Create-A-Finisher, but that was pretty pointless anyway). 2K Showcase, Visual Concepts’ answer to the story modes of old, returns for a second outing with chrome domed beer-swiller Stone Cold Steve Austin as its cover star. Covering some of his biggest matches, from his oft-forgotten clash with Ricky ‘The Dragon’ Steamboat at Bash At The Beach ‘94 to his incredible, announce table-destroying war with The Rock at WrestleMania XV and beyond, it’s a dream offering for Rattlesnake devotees.

The production values are top notch, too - grainy filters over old WCW matches add a pleasing sense of authenticity, while actual in-match audio from each actual bout gives the whole mode a brilliant sense of time and place. Even Joey Styles (the old ECW colour commentator) returns to call the one ECW bout on the card. Sure, the dev could have just had JR and Lawler do the VO, but it wouldn’t have felt right - having the voice of ‘ee-see-dub’ return shows just how far it’s willing to bottle the magic of ‘rasslin.

Having Jim Ross and Jerry Lawler return to re-record their commentary of Austin’s biggest matches is a masterstroke (especially considering this may be the last time they’ll ever team up), but their VO sometimes falls a little flat. 15 years ago, the best announcers in the game immortalised countless matches with their impassioned reactions to big spots, surprise returns and narrative swerves. Here, JR simply plods on at a gentle pace while Austin unleashes white collar hell. It’s a bizarre dilution of the mode’s most authentic addition, but hey, it’s Jim ‘Bah Gawd!’ Ross, let’s just be thankful we get to hear him call WWE matches again.

The bouts included mostly cover Austin’s Attitude Era tenure, but considering some of these bouts appeared as recently as WWE ‘12’s ‘Attitude Era’ mode and WWE 2K14’s ‘30 Years Of WrestleMania’ campaign, it can feel like well-trodden ground. However, it’s still a great way to earn new content (wrestlers, costumes and arenas are all unlocked via completing in-game objectives), but the segmented nature of its gameplay feels at odds with the sense of player agency exuded elsewhere and leaves the Showcase mode feeling archaic (and ultimately forgettable) by comparison.

Take a walk into the rejuvenated MyCareer, however, and that freedom is a revelation. You can now enter any championship division (including the NXT and Tag-Team titles) and work your way up to number one contender. More importantly you can then choose to stay and defend your title until you’re ready to move on. The freedom here gives you more agency than ever before and it makes last year’s instalment balk by comparison - you can even choose a heel or babyface persona and reinforce/switch it up with new backstage promos with a haunted-looking Renee Young. Hell, you can even join or feud with The Authority. With the ability to create rivalries that follow you through your whole career, MyCareer finally feels like a substantial component.

All in all, WWE 2K16 is the best wrestling game we’ve seen in a long time. The shift to full-on simulation is still a shock to the system, but it’s a necessary one that finally stops the WWE games feeling like beat-’em-ups with added melodrama. More importantly, the new systems and mini-games bring a sense of legitimacy that wrestling games have strived for but often missed out on in the past. The NBA branch of the 2K series is still the king of sports simulation, but WWE 2K16 is making for good company. MyCareer is evolving into a rewarding experience all on its own and the sheer amount of content on offer elsewhere in its bountiful package will keep you a happy tenant of Suplex City for many years to come.

With a huge (and mostly up-to-date) roster, a Stone Cold-obsessed Showcase mode and a fine-tuned MyCareer, the WWE 2K series finally delivers the best wrestling game since Here Comes The Pain.

Dom has been playing games longer than he'd like to admit, but that hasn't stopped him amassing a small ego's worth of knowledge on all things Tekken, Yakuza and Assassin's Creed.
See comments