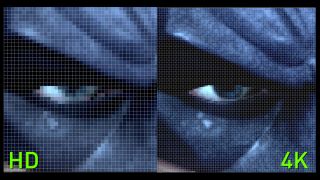 Thanks to the latest generation of shiny new consoles from Sony and Microsoft, there's two fancy new terms to try and get your head around - 4K and HDR (or high-dynamic-range). And, confusingly, the different consoles all do differing amounts of each, from the Pro to a normal PS4, Xbox One to the Xbox One S and the undeniably more powerful Scorpio.

Don't worry though, we got you. Here's a handy guide to make it all clear.

Xbox Scorpio vs PS4 Pro: which comes out top?

What does 4K mean?

Here's that in picture form:

So 4K is double the resolution of 1080p, which means more detail can be displayed on screen in a native 4K output. Images look crisper and more detailed, so you’ll be able to see things like defined wrinkles, scratched metal, and separate strands of hair. 4K ends up making a huge difference to the overall look of the image or game by bringing tiny details into focus. However, if it's upscaled, it's simply a picture resized to fit 4K. So while it might fill the screen an upscaled image won't add more detail.

What does HDR mean?

HDR stands for high-dynamic-range, and simply means you get higher levels of contrast plus brighter colours, meaning that it matches what we see in real life much more accurately. It lets you see detailed objects in the dark instead of just murky outlines at the same time as having pitch black and bright light sources in the same frame.

While you'll only be able to see gaming and video HDR moving on an HDR compatible TV, it's easy to see with photography. So take a look at these two images:

Netflix’s corporate communications manager Yann Lafargue says that HDR “offers a new set of tools we can use to make bright and colourful scenes really pop, and at the same time, bring out more detail in dark scenes”.

So, what does this mean for games? It means you’ll be able to see in dark areas instead of trying to make your way through various levels of murky light. Plus you’ll experience more dynamic colours, and shadows won’t act like a pitch black blanket which obscures all details. Everything will end up looking much more vivid too. There'll be a more seamless transition between areas with different light levels too, meaning you won’t have to bump the brightness levels up whenever you go somewhere remotely dark.

If you're looking for a new screen to make the most of your new console, check out the best 4K TVs for gaming.