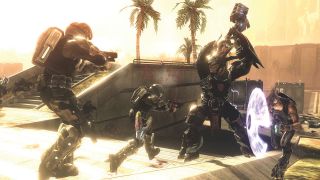 As the old saying goes – ‘to err is human, but to crush endless waves of alien interlopers is divine’. Or something like that... the point being that as far as the humans of the Halo universe seem to know, Spartan IIs may as well be green-clad gods among us.

With Halo 3: ODST, Bungie attempted to remind us of that fact, and of the fleshy helplessness of the rank-and-file foot soldier. Oh sure, Buck and his fellow shock troops may be the best of the best, but to an enemy intent on squishing them under a size-9,000 boot, the well-trained snail fares little better than the rest. Simply put, ODST is a game that makes you feel vulnerable.

As the Chief, we’ve boogie-boarded space bombs and grappled with the Gravemind. Here however, the battle lines have been redrawn, and what the seven-foot superman can achieve in mere moments tends to take a more human trooper the better part of an afternoon.

And nowhere is this newfound frailty better expressed than when going on the defensive. Consider the game’s sixth mission, ONI Alpha Site – a brief yet beautifully paced encounter that represents the premier example of ‘defence done right’.

The static defence mission is as played out today as the fixed gun emplacements upon which they typically depend. “Stand here, man this and shoot that,” they seem to shriek, “and don’t you dare stop until we’ve run out of fodder”. In less capable hands, being on the back foot may as well translate to ticking off a checklist. Knock down these ladders, fix this barricade, drop that bloody great stone thing onto someone’s skull. It’s less a case of saving the realm, and more making a mess at the hardware store.

Yet for all these issues, ODST has an answer, and it’s usually a damn good one at that. Confined to a tight, deliberate and thoroughly linear space – at least by franchise standards – Alpha Site cleverly sidesteps the issue of bland, stationary action by virtue of its mobile ‘rolling defence’.

Playing as Dutch, you’ll kick things off by fleeing over a bridge – harried on all sides by Banshees, Brutes and assorted plasma blasters. The beauty of this scene, and indeed much of the remaining mission, is the way in which it forces you back organically – more as a consequence of the mounting odds against you than as part of some flimsy plot contrivance. Indeed, no objective is ever truly enforced here. Instead, players are given a welcome degree of freedom to fight and flee as they choose.

Would you rather fend off enemies than set the explosives? No problem – Mickey will rig the bridge. Or perhaps you’d rather clamber onto a turret, or snipe from atop a tower? Fine, do whatever you choose – Halo has your back. Sure, it’s no sandbox, but as meta-games go, holding out alone, or with a friend, makes for one hell of a struggle.

With the crossing now kaput, Dutch soon finds himself running into the rear of the Covenant vanguard, creating a miniature pincer movement of sorts, even as the aliens’ own mandibles tighten around you. From there, Alpha Site’s hilly plaza quickly devolves into a landing site/enemy beachhead, as defence becomes attack becomes defence. One moment you may be reeling from a six-Brute staredown, and the next ripping off a mounted gun to desperately turn the tide. It’s breathless, chaotic stuff – and more discombobulating than watching a children’s TV builder trapped in an atomic test. You know, like the movie Watchmen, except with Bob The Builder? Forget it...

With the outer plaza surrendered, the action soon moves inside, and to a lobby scene that recalls some of cinema’s best efforts. Look left and you’re in The Matrix, to the right it’s Terminator 2, or Die Hard, or just about any other battle that gives pride of place to a reception desk.

If that last scrap was akin to Saving Private Ryan, then this one is surely the Alamo. With nowhere left to turn it’s time to make your stand, and what a last stand it is. Grenades go flying, ammo evaporates and Grunts make suicide charges aplenty. It’s terse, tense and terrifically exciting – the inadequacy of your defences only amplified by the lack of any Spartans on hand to save you. You’re the best of the best, but still only human. Every dead Brute is a bonus in a battle you were never supposed to win.

The only real let-down is the ending. The ensuing lift scene isn’t up to much, and the rooftop escape lacks the punch you’d expect, but these are minor gripes about what is a thoroughly enthralling level. Do yourself a favour and man those barricades.