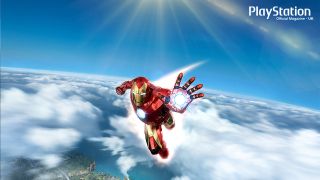 The wonderful thing about pairing Iron Man with PS VR is how the two complement one another; it's the ideal match of license and technology. As we chat with the game's director, Ryan Payton, he's clear that perfecting the sense of flight came first. "The initial prototype came together extremely quickly thanks to the incredible work of Camouflaj engineer Troy Johnsen, and I think even he was blown away by how fun the game was after only a few days of work," reveals Payton. "Even in its early 'grey box' form, it was really fun to fly around using physics thrusters from the palms of your hands."

Having played the game, we can say it is one of the best uses of virtual reality coming to Sony's headset. "From the beginning of development, we zeroed in on capturing the sense of freedom and power of flying as Iron Man, and it remains a core pillar of the game to this day," says Payton. Flight feels genuinely physical: you hold the PS Move controllers to your sides to propel yourself upwards in-game, then swivel them to change direction. Combat is a mix of firing locked-on missiles and more hands-on moves, such as the ground-pound and rocket punch that "enable raw, visceral hand-to-hand combat," in Payton's words.

The enemy AI has been designed to test your flying and shooting skills, and your foes behave like more than cannon fodder. But getting to this point when we can fly around sandbox maps as Iron Man has taken a long time – it's a "culmination of years iterating on the model, materials, animations, VFX, SFX, and black magic engineering under the hood," says Payton.

The details are what makes the action feels so immersive. For example, the team spent over a year ensuring that we can see Iron Man's full arms in the game so we won't be drawn out of the experience by floating hands.

The smallest things really matter. Who'd have thought we all hold PS Move controllers in subtly different ways, and this affects how the game plays? Payton explains: "Every player grips the PlayStation Move controllers differently, similar to how everyone doesn't grip a pen in the same fashion. The player's signature handling of the PlayStation Move controllers has an impact on his or her ability to fly in their intended direction, so we implemented a few – hopefully unnoticeable – features under the hood that help smooth this all out. All credit goes to our engineers for creating some truly black magic tech that powers our controller tracking."

Control aside, Payton says telling a meaningful story within this game is as important as achieving that sense of flight. "We have put many years of work into the game's script, cinematic pipeline, and character-driven moments. We're all really proud of the game's campaign, which puts the player in the shoes of Tony Stark in an all-new story."

The game isn't just about Iron Man you see, it's also about Tony Stark. But delivering on the man behind the mask is more nuanced than offering us the power fantasy of Marvel's most famous suit of armour. Being the billionaire genius means spending time in his home: "We've built Tony's Malibu mansion and garage where the player can tinker and upgrade their Impulse Armour. Between missions, the player can return to the garage to select missions, among other things we're not ready to talk about just yet..." says Payton. We can't wait till they are.

This article first appeared in OPM. For more excellent features the one you've just read, don't forget to subscribe to at MyFavouriteMagazines.