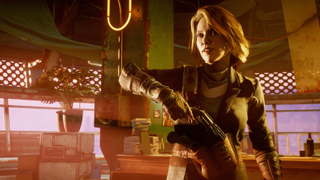 Bethesda has one hell of a vision for the end of the world. In Rage 2, an open world wasteland is being constructed that's full of vibrant colours, huge explosions, and a host of gaudy characters to meet, greet, and eviscerate. It’s a far cry from the traditionally dour settings seen in so many other post-apocalyptic worlds – such as Avalanche’s 2015 take on Mad Max and even Id’s own first pass at Rage back in 2011.

That's why, for this sequel, the two studios have collaborated in an effort to play to each other’s strengths. It feels like a true jam session, with Avalanche's expertise in designing unhinged open worlds colliding with Id's uncanny ability to design some of the best feeling weapons in the games industry. But how is something so outrageous being tied together? By one of the most ridiculous storylines to arrive this year, of course!

In an effort to find out just how out of control Rage 2 is going to be when it launches on May 14, we sat down with Avalanche's narrative director, Odd Ahlgren, and the studio's senior narrative designer, Loke Wallmo, to get some insight into the mastery behind the chaos.

Rewriting the history of Rage

Rage 2 is a sequel, but it feels quite fresh in terms of how it follows on from the first game. How do you approach that from the ground level, narratively speaking?

Odd Ahlgren: The first thing we thought about when we were gonna pitch our ideas for Rage 2 was ‘where do we want to put ourselves in the history of Rage?’ Because we really liked the first game, we wanted to keep it in the same universe. But we wanted to add our own spin to it, and that’s why we [set] it 30 years in the future from when Rage ended. A lot of things have happened since then; the wasteland moves in faster cycles than our world, so there are remnants of what we saw in Rage 1 but it has changed dramatically and looks very, very different. In doing it this way, we could maintain the basic feeling and ambience of the first game, but add our own crazy twists to it.

Loke Wallmo: The giant ECOPods that terraformed parts of the world to greenery [after Rage] allow us to have more variation, and allows us, yeah like [Odd] is saying – a fresh start is what we really want for the franchise, and that’s really what Bethesda and Id wants as well. So we felt it fit really well with what everybody wanted, so it was an easy start from our perspective.

How involved has Avalanche's narrative team been in the production of Rage 2 to make this happen?

OA: From the very beginning – from the early concept phase. We felt that it’s two things that sit right next to each other – there's the gameplay and there's the story. It this case, [narrative] feeds so much into the art and sound. So art – especially art – and narrative have been working really, really close on Rage 2 from the get-go. It’s really good. It means that everybody’s on board, that way we don’t end up in a situation where we have a lot of beautiful things but nobody knows what they are there for or why they’re so great looking.

Are there a lot of little stories to uncover all throughout the world?

LW: Yeah, we’ve sort of spread it out all over the place so it’s kind of like more of a sandbox. You’re going to a certain place and you find something there and it has a context and story.

Telling an original story about the titular road warrior, Mad Max marries vehicle-based action and third-person combat surprisingly well – though the world is as bleak and brown as you might expect.

The open world of TheHunter speaks for itself, giving you a sandbox in which to, well, hunt. Your own stalking and hunting connects you to the world.

Set on the fictional island of Solís, where action hero Rico has to battle a rival army through its crazy biomes. Environment variety is important to Avalanche, and that shows here.

How do you go about making the areas distinct from one another?

OA: Those things usually have an explanation in the context of the game world.

LW: Something we’ve tried to do is to figure out who lives in each place, why are they there, and why do they hate everybody else?

OA: Yeah, you come into a town or a city and do they have police? You know, those are the questions [we ask ourselves]. So we have one town where they don’t have police, because they’re a lawless town and people don’t kill each other because everybody’s armed – that’s the only reason that people don’t kill each other in it. Another town they of course have guards everywhere, because it’s that type of town. We try to approach things from the bottom up. Of course, it’s not a simulation – we’re not making a city simulator – but it’s that at least we’ve given it that thought, that vibe that ‘here is this, and this, and this, and it works according to these rules.’

LW: Something that I think Rage put a lot of focus on, that we’ve tried to maintain in Rage 2, is the crazy characters that show up and have their own motivations for doing things and asking things of you. That’s something that we want to spread out through the world a little bit as well. There’s a strong part of that in the main story of the game, in the fight against The Authority. But that also echoes out throughout the rest of the world as well.

With areas like bandit camps – like Stilt Town, that we've seen in recent demos – you’ve mentioned there are little stories revolving around why they’re there. At what part of the process do you come up with locations like this?

LW: There’s pretty dynamic back-and-forth between the world and location builders and us. They come up with a great idea or vice versa, and I think in a lot of cases we sort of get inspired by each other. Like, say they want to build an enemy base on top of a bridge and we’re like, ‘okay, can this be some old Trading Post that’s been taken over by bandits?’ and then we sort of go from there. It’s a lot of back and forth.

OA: Usually, it’s also if the world designers feel that they should have [more] information hubs spread out into the world. Those could only be notes, or we can create a cool story around each and every one of them to make it better in the world. We usually try to do it that way.

LW: I have to say, Bethesda and Id has been pushing for the story... They knew that they wanted a strong story component in the game, and pushed for that from the very beginning.

As fans of their games, what’s it like working with Bethesda and Id?

LW: It’s really strange for me. My way into the games industry has been like building Doom levels back in the ’90s, so it’s like that’s where the interest comes from. Even though I’m building levels today, it’s still weird to work with Id who has been like such a big part of my gaming life. That’s humbling in a way. And cool! Cause they’re really nice guys!

OA: It is humbling. I gotta say that it can still get you sometimes like “Wow, we’re working for those guys.” But it’s also hard to love those games, and then create a post-apocalyptic video game for the same publisher that’s not that game, and trying to avoid getting inspired by that game. But I think that we’ve succeeded. We’ve created a different niche.

LW: Open world is certainly new when it comes to the Id portfolio, so we’re learning from each other a lot I think, because we both have our special interests or special backgrounds that we come from.

Do you love games with a story? Then take a look at our list of the 30 best videogame stories ever told!