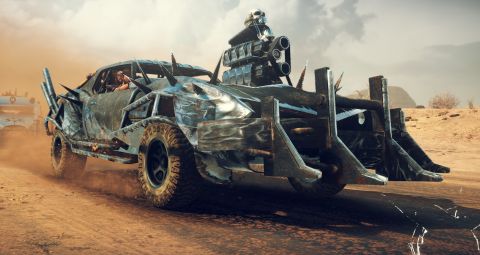 Mad Max might be formed from familiar parts of other games, but the car-wrecking, skull-cracking chaos it creates is a rewarding and expansive adventure.

Poor old Max. Seems like he can’t start the day without having the sense kicked out of his skull and being left for dead in the desert. It’s like an alarm clock for him. Only with no snooze and more boots. Warner’s tie-in, while oddly divorced from the recent movie, upholds that tradition, with Max waking up in the dust minus a car and setting out on a quest to build a new one, mainly via the medium of blowing shit up and frowning.

The game’s opening introduces you to an Igor-esque mechanic called Chumbucket who builds you the bare bones of the Magnum Opus, a replacement for the movie's iconic Interceptor. It forms the backbone of the whole story as Max tries to trick it out to a level high enough for him to reach the mythical ‘Plains of Silence’, an arbitrary plot MacGuffin driving the whole thing forward.

To achieve this you're set loose in a vast, hugely populated map, pulling off missions for various minor warlords and trying to lessen the grip of the dominating Scrotus gang by destroying its bases, minefields, totem-like scarecrows and other displays of power. In terms of scale this is right up there with The Witcher 3 for having the kind of map that makes you want to switch the game off as soon as you see it - the thing’s huge, with the sort of obscuring smatter of markers that’ll have you wiping the screen just to make sure you’re actually seeing it right.

It’s this scale that’s both Mad Max’s greatest strength and, to a lesser degree, its weakness. There’s a good game here eventually, but one that takes some time to find itself. Early on it’s all a bit directionless with such an arbitrary overall objective: you’re trying to make your car better by completing missions to… um, make your car better. With such a woolly heading, the first 4-5 hours become a formless muddle among the wealth of things to do, making it easy to get lost or find yourself in trouble above your level.

Once you get past those muddy first hours however, the world opens up and Mad Max becomes a seriously enjoyable realisation of the character. The plot, already more a distraction than a directive, becomes secondary to the pure dusty joy of driving around looking for trouble. Forget that main mission, the wasteland is the game. Whether that’s ramming convoys off the road or fighting your way through camps - this is all about the journey, a perfect setup for the original Road Warrior.

Mad Max manages a good level of variety with its desert setting. The post apocalyptic dust bowl changes and shifts as you explore. Grey wastes give way to jutting rocks or yellow dunes. There are oil-sodden swamps, fields of scrap under pressing, pollution-filled skies, a dried up sea bed full of rotting ship carcasses, and other recognisable remnants of the old world. Even exploring a seemingly innocuous camp can uncover a ladder to dark and unexpected underground caverns.

The counter-based combat swaps out the feel of a trained fighter for a kerb-stomping brawler, dishing out ugly fist-swinging thumps that crunch enemies underhand like someone dropping rocks on a meringue. Early fights are tough because you lack the abilities to deal with knife-waving thugs, or Warcriers who buff surrounding enemies. It’s a slog just to make it through a small gang. Unlock a few counters though, to use enemies’ weapons against them or pull off insta-kill moves on stunned foes, and suddenly you start to dominate. If you like satisfying progression then building out Max to take apart a crowd of War Boys in a handful of devastatingly considered blows is just the best.

It’s the same with the car. Early road tussles can feel a little like you've cycled out into the fast lane of the motorway with nothing but a pokey stick and a lot of ambition. But, by the time you've kitted out the Magnum Opus with better armour, spikes, engines and more, you’re smashing opposition off the road, blowing up fuel tanks with drive-by shotgun blasts and pulling drivers from their seats with the game’s signature harpoon.

It’s expanding and developing your tools that make this game sing. Even friendly bases have their own upgrade tree that provide another layer of options to play with. Things might start with you as the victim in a threatening world, but it's not long before you craft Max to become the danger instead. One minute you're fighting to make it from A to B, the next you’re flattening all in your path, rolling with the blows and improvising on the fly. Do you snipe an enemy base’s defence from afar, drive past, hell-for-leather, pulling down sentry towers using the harpoon without stopping, or sneak through a gap in the wall a local told you about?

There are a few things that don't get better over time. There’s a bizarre, apparently random use of the DualShock speaker for sound effects that can distractingly break immersion, for example. A sprinkling of Australian accents add an otherworldly magic whenever used, but only really serve to highlight the blandness of the cookie cutter American voices filling the majority of the game. The camera also struggles in tight spaces, causing problems if a fight tumbles into a corridor or shipping crate.

Perhaps the biggest failing here, though, is Warner’s apparent lack of faith in what it has (hello minimal advertising, last minute review code and that suicidal MGS5-matching release date). This may not be breaking any new ground but it’s a satisfying experience with plenty to do. By the time I'd finished the main story I'd clocked 38 hours and apparently completed 39% (!). The main story, despite its mundane crux, does ultimately deliver a worthy climax (it'd be spoilers to say more) before returning you to a still daunting map full of bases, side quests, diversions and everything else to mop up. The plot might barely exist for the majority of the game, while direction and focus takes its time to come together, but none of that matters. Just being in the world is enough. You are Mad Max, a violent stranger roaring across the wasteland in a cloud of dust and violence.

Mad Max might be formed from familiar parts of other games, but the car-wrecking, skull-cracking chaos it creates is a rewarding and expansive adventure.