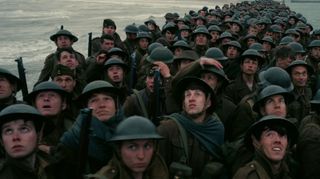 It's fair to say that film fans have been a bit underwhelmed by a few summer blockbusters this year, but there's some exciting prospects to look forward to in 2017. Chief among that highly anticipated pile of movies is Dunkirk - which marks Christopher Nolan's return to cinemas - and you can check out the first teaser trailer for the World War II epic below...

In typical Nolan fashion, this brief trailer really doesn't give much away (not even a shot of Harry Styles!). It does however offer up plenty of intrigue and tension, and it makes me curious to see how Nolan fares with a war movie. We'll find out in just under a year's time.