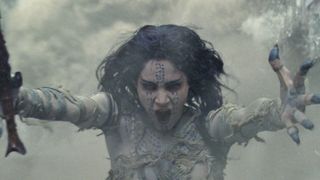 When Universal announced that it would call its monster-licious cinematic universe - set to kick off with The Mummy later this month - the "Dark Universe," did you happen to raise an eyebrow, maybe stroke your chin a bit, and say to yourself, "Hmm, that sounds familiar…"? Well, some folks over at Warner Bros. sure did, and now there may be legal repercussions for Universal.

According to The Hollywood Reporter, WB is "mulling legal action" against Universal for the name. See, "Dark Universe" is the working title for a DC film based on the Justice League Dark series of comics, and has been since 2013. If you're not familiar, Justice League Dark is to the rest of DC heroes as Doctor Strange is to The Avengers; ie. while Superman and Batman are punching bad guys with their fists, the members of JLD use magic to battle supernatural threats.

Since Dark Universe is (currently) just a working title for the film, WB may not pursue action. But if the company wants to keep that name, Universal could be in hot water. Of course, none of this will matter at all if The Mummy tanks and Universal abandons its plans for an interconnected series of films anyway. So maybe this is one of those "wait and see" moments.

Who knows if The Mummy will be any good, but I for one hope the Dark Universe at least gets a few more classic monsters into cinemas. At least give us The Rock as The Wolfman!