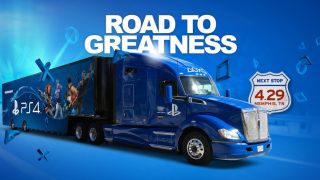 Sony is going cross-country with the Road to Greatness Tour, packing PlayStation demos, contests, and prizes into a 16-wheeler that will be rolling into more than a dozen cities across the U.S. It's a great opportunity to see the future of PlayStation, particularly if you're curious about PlayStation VR, which will be a major focus of the tour.

The Road to Greatness 2016 Tour will also feature prizes and swag, some of which can be earned via tournaments, some of which will be given to every attendee. Those who stop by will also get a special offer for the PlayStation Store. The PlayStation Blog post announcing the tour doesn't specify exactly what that offer will be, but says that it will be related to games featured on the truck.

To see when and where the Road to Greatness will be taking place, check out the full details on the official site.