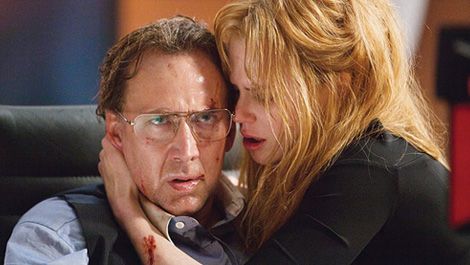 Given the volume of remakes hitting cinemas in 2011, Trespass could’ve been a reboot of Walter Hill’s Bill Paxton versus Ice-T action thriller. It’s saying something that it makes Hill’s 1992 guilty pleasure – which is nothing to do with this film – look like a work of genius.

Where Hill had a fireman mixed up with stolen loot and gang warfare, Joel Schumacher has diamond merchant Kyle (Nicolas Cage), his wife Sarah (Nicole Kidman) and their bratty daughter Avery (Liana Liberato) trapped in a home invasion orchestrated by armed thugs.

When the crooks demand Kyle opens the safe, his answer is one they don’t expect: “No.” Wasting Kyle’s unusual stance, the tiresome script instead decides to do a little trespassing of its own, offering the kind of ‘characterisation’ seen a thousand times before.

Someone should have told writer Karl Gajdusek that if you’re going to pilfer it’s best to take the gems, rather than filling your movie with stuff you found in thedrawer marked “clichés”.

What looks like a happy family is of course an imperfect unit, with a too-busy dad, troublesome teen and a mum who’s only holding things together between longing glances at cam Gigandet’s buff security guard.

At one point the chatter picks the pocket of today’s news; but it takes more than just a few lines comparing the robbery with the global financial crisis to add depth.

Looking to the robbers for dramatic help proves fruitless too. Instead these misfits undergo Jerry Springer-style group therapy as their supposedly quick smack-and-grab drags on.

Little wonder things go awry when their ‘masterplan’ only extends to SHOUTING VERY LOUDLY and threatening the family with violence. When this cycle repeats for a third time it feels as if some of the script’s pages were accidentally photocopied twice and everyone was too busy sleepwalking through their parts to notice.