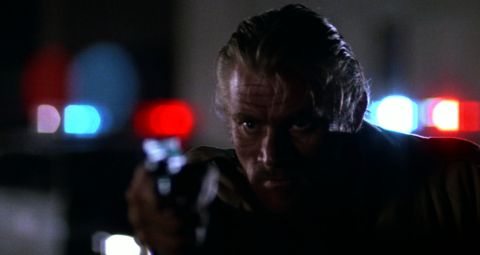 On the CV of Charles Band, one directorial credit stands out from the surrounding dreck like Parasite and Gingerdead Man vs Evil Bong: Trancers, a cult item so entertaining that it balances out the largely worthless output of his production companies (Empire Pictures, Full Moon Features).

It follows Jack Deth, a maverick ex-cop from 23rd century LA, who leaps back into the body of an ‘80s forebear in pursuit of Whistler, an evil mastermind intent on wiping out the future’s ruling council by killing their ancestors. At Christmas.

The high-concept is pure Terminator. The look and sound – narration, electro score, red and blue neon everywhere – is low-rent Blade Runner. Deth’s trenchcoated character and the seedy downtown locations he visits are hard-boiled noir. The tone is tongue in cheek. It’s a combination which works surprisingly well.

Plus, there are amusing one-liners aplenty (“We’ve got trouble at the North Pole” a mall employee reports, after Deth shoots Santa) and some cute gimmicks – like a digital watch which can stretch one second to ten, giving our hero just enough time to skedaddle. A fresh-faced Helen Hunt is also very good as Deth’s implausibly young love interest (age gap: 17 years), the sorta gal who maintains her sangfroid even after smashing through an apartment window on a moped.

If Band had directed four or five movies this good instead of the 47 he actually has, he’d probably be as well-respected as Roger Corman.

Extras: Commentary by Band (who remembers next to nothing) and star Tim Thomerson (who knows the address of every location); this could have really done with a moderator, as they get sucked into watching and enjoying the film rather than telling us about it. A Making Of with the director and the two writers (14 minutes) is more illuminating. Trancers: City Of Lost Angels (25 minutes) is one third of an anthology film shot in 1988, never completed, then lost until a workprint was found on VHS. The work of the same cast and crew, it’s an interesting curio, if you can tolerate the ropey picture quality. Other bits and bobs – including a gallery, two minutes of vintage interview clips, and footage of Band introducing City Of Lost Angels at a convention – will not detain you for long.