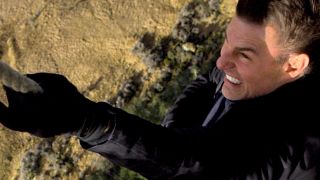 Tom Cruise has a reputation for outdoing himself in the stunt stakes, and over the past 22 years the Mission: Impossible movies have been on a, erm, mission to go bigger than what’s come before. Considering that in the last couple of films Cruise has dangled on the side of the world’s tallest building and clung onto a plane as it's taking off, that’s going to take some topping.

Well, Fallout – the sixth film in the series – sees the actor/producer/stuntman engaging in one of his riskiest manoeuvres yet, with a helicopter sequence set to be a standout. Filmed in New Zealand, the set-piece required more than a year-and-a-half’s prep, with Cruise required to learn how to actually pilot the helicopter. Not only does he fly the chopper during the high-octane sequence – that’d be too easy – he’s also required to dangle off it on a cargo net, and climb his way up to the cockpit.

You can get a glimpse of that particular moment at in this exclusive image from the new issue of Total Film magazine, which has Mission: Impossible – Fallout on the cover. Check out Cruise in action below…

There’s obviously a huge amount of planning that goes into an action scene like this, but returning director Christopher McQuarrie (the first person to helm more than one M:I film) tells Total Film that the sequence was “far and away the most challenging thing that I’ve ever done, for the amount of screentime it will actually take on.”

And ever the multi-tasker, Cruise has the day-job to think about while performing in a stunt like this. “I’m also not just flying a helicopter, I’m performing in the scene,” Cruise explains to TF. And the intensity of the situation led to some unusual side effects. “The adrenaline was going so hard,” continues Cruise, “that I would finish at the end of the day, and I’d have to go home and eat three meals. I’d have to have three dinners. My body couldn’t get enough food, and my legs ached from adrenal fatigue. It was fascinating.”

Fallout sees Cruise’s Ethan Hunt going rogue after a mission gone awry, and franchise newcomer Henry Cavill is the unstoppable CIA agent on his tail. For much more on the film – including more from Cruise and McQuarrie, as well as Cavill, Rebecca Ferguson, Simon Pegg and more – grab a copy of the new issue when it hits newstands both real and digital this Friday, June 1. Or, to make sure you never miss and issue and even get it before it hits shelves, why not subscribe?

Doing so will net you an exclusive subscriber-only cover (like the one below), and you’ll also save money on the cover price. What’s not to like? Head to My Favourite Magazines for more info.

Mission: Impossible – Fallout opens on July 26 in the UK and July 27 in the US.