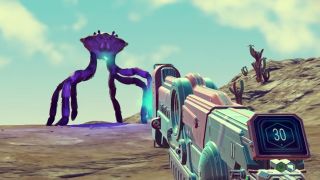 No Man's Sky is huge, but that still isn't big enough for the two of us, pardner. And by "two of us" I mean the player and the computer-controlled fleets they'll encounter, since the universe is so huge it's unlikely you'll ever encounter another human being out there. But still. Not nearly big enough, as this new "Fight" video from Sony and developer Hello Games demonstrates.

You don't have to shoot every other moving thing you see in the game, but you'll see a lot more of those nifty blaster effects if you do, so… quite a dilemma. If you're more interested in seeing the wonders of the universe than blasting them into charred bits, check out the No Man's Sky Explore video.

Sony still has two more videos about the "pillars" of No Man's Sky coming in the weeks before launch: one for Trade, and one for Survive. You can put them all together when the game hits PC and PS4 on August 9 in the US and August 10 in the UK.