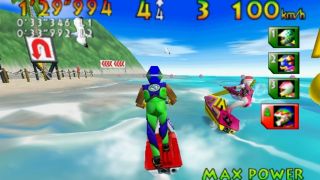 It's been 15 years since we heard from Wave Race, the jetski racing series that so many of us remember from our days with the Game Boy, N64, and GameCube. But we might not have to wait much longer, because today, Nintendo filed a trademark for "Wave Race" in Europe.

Lest you think this is for a TV show or some other non-video game product, the filing is specifically for a classification 9 product. Class 9 products are most often one of two things: computer software or scientific instruments to be used in a research laboratory. And I don't think Nintendo would file for the latter.

This doesn't mean a new Wave Race game is for sure happening, mind you. And even if it does, who knows if it'll be ready by the Nintendo Switch's release date of March 2017, or if it's coming to the Switch at all. Still, I'm optimistic. And a little jazzed.

At this point I'd like to point out that in the GamesRadar podcast we recorded after the Nintendo Switch's announcement, I (jokingly) said that the only thing that could sell me on the new system was a Wave Race game. I don't wanna say I called it or anything, but...