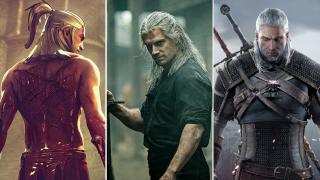 The Witcher Netflix series was one of the most-watched shows of 2019 and more people are playing The Witcher 3: Wild Hunt than ever before. As a result, a growing number of fans are finally plunging into the source material – Andrzej Sapkowski's best-selling novels.

However, knowing where to begin with The Witcher books is not exactly straight forward. Eight of them have been published since 1993 – though the world was first introduced to a 'Witcher' in 1986 and the Witcher Geralt of Rivia in 1990 – and there are plenty of differences between the original stories and the Netflix and game adaptations. The 1993 date refers to the first book's original publish date in Polish; the English translation were released from 2007 onwards, with Danusia Stok translating the first two and David French taking over from the third book, so we have them to thank for bringing it to us English-speaking folk.

We're here to help. Consider us your bard for all things The Witcher, as we take you through the essential reading list, offering you a beginner's guide to all things on the Continent. Come along, weary traveller, as we tell you a few tales...

Warning: there will be some light spoilers for The Witcher books and Netflix series below.

The world of Geralt of Rivia first debuted in Polish science fiction and fantasy magazine Fantastyka in 1986, when author Andrzej Sapkowski won third place in a new talent contest with his short story simply titled "The Witcher".

To keep it short and sweet (like most of Henry Cavill's dialogue in the Netflix series), Sapkowski's story introduces Geralt, a witcher – AKA someone who is taken from their parents when they are a child, trained rather brutally, and given special abilities through mutations to help battle monsters, which they do for freelance work. That must be a fun invoice.

The books introduce us to the Continent, a land settled by elves but initially home to gnomes and dwarves. War breaks out between the native people and the elves, ending in a semi-truce that basically means they agree to live in separate areas (think Christopher Columbus but fantasy). At some point, a supernatural event known as the Conjuring of Spheres takes place – rifts between realms open up, trapping a litany of dangerous creatures (like ghouls, werewolves, and vampires) on the Continent. Humans come shortly after this cataclysmic event, setting off a long series of bloody wars. Mankind wins and establishes a social hierarchy in which non-human races are deemed inferior. Eeeesh.

The Witcher books make it clear that the relationship between these varying races is tenuous at best; bloody at worst (and most often). The saga begins amongst the aftermath of the first major war between the Northern Kingdoms and the Nilfgaard Empire, the latter of which has taken over much of the Continent's southern lands.

Where to start with The Witcher books

You'll want to start with The Last Wish, a collection of short stories that helps establish the fantasy universe. You learn about Geralt's silver sword (that's for monsters), sexual prowess (that's for everybody), and the rampant corruption that takes place amongst the Continent's governments.

You'll also meet some characters who feature in the Netflix series, including Dandelion the bard (renamed Jaskier in the show), the sorceress (and Geralt's sometimes lover) Yennefer of Vengerberg, and Pavetta, the mother of the most important young woman in Geralt's life, Ciri.

Many of the stories in The Last Wish have been adapted into the Netflix series, which will give you a neat bit of context on your first viewing (or third re-watch in my case). There are mentions of other key players from the series (like Triss Merigold), but only in passing. You'll also get a better understanding of the warring factions and dirty politics of the Continent, which can get quite confusing if you only consume the show or the game.

The Last Wish and Sword of Destiny are both collections of short stories told in The Witcher universe, while Blood of Elves onwards are all full-length novels. Sword of Destiny sets up Geralt's bond with young Ciri quite nicely and is one of the books, along with The Last Wish, that has had the most excised from it for the sake of the Netflix series. Blood of Elves introduces us to Triss Merigold for the first time, another sorceress and third point on the Geralt/Yen love triangle. He's got a thing for magic women, huh? And Lady of the Lake is the end of Geralt's story.

There is another book called Season of Storms (first published in 2013), which takes place during the same time period as The Last Wish. There's nothing in the novel that drastically changes any of the characters or storylines, but if you're a completionist you'll want to grab it. It tees up some nice payoffs that happen in later novels.

How do The Witcher games tie in?

Both The Witcher Netflix series and The Witcher game series can be considered different adaptations of the same source material, but it's interesting to see how the show plays off of both pieces of media that came before it.

For instance, the Geralt of Rivia from Sapkowski's novels is skinny, brooding, and repeatedly down on his luck, struggling to make ends meet between witcher contracts. He enjoys the odd philosophical rant or two. Geralt of Rivia from the games is quite buff, witty, and – if you do enough side quests – has a fair bit of coin. He also has facial hair, which Geralt of the novels hates.

Geralt in The Witcher Netflix series is an amalgamation of the two – clearly Henry Cavill is an absolute unit, but in the very first episode he's struggling to find work; a young girl mentions the kikimora he's killed could fetch him enough money to "buy new clothes." He's also clean-shaven.

The game series is considered a non-canonical quasi-sequel to the Witcher books, but CD Projekt Red pulls from Sapkowski's source material in a manner the author has "expressed happiness" about, according to The Washington Post. Geralt suffers from amnesia in the first two games, as a means of introducing newcomers to the world of The Witcher while also moving Geralt's story forward. That's likely why Sapkowski has made it clear that these are not canon sequels or a true continuation of his stories, telling Eurogamer back in 2012: "The game – with all due respect to it, but let's finally say it openly – is not an 'alternative version', nor a sequel. The game is a free adaptation containing elements of my work; an adaptation created by different authors."

Should you play The Witcher games?

The short answer: yes. There's a reason Witcher 3 was named one of our best games of the decade...

The first game, released on PC and Mac, was certainly an important milestone in the history of gaming but doesn't hold up particularly well. The dialogue is wooden (please watch this), and the misogyny is real, offering you the chance to sleep with women in exchange for trading cards. The graphics also leave several things to be desired – as Kotaku's Ethan Gach writes: "Geralt has a horse face."

The Witcher 2: Assassin of Kings is a marked improvement, and it's available on Xbox 360 and PC. There's more politics, fewer monsters, and a linear narrative greatly affected by in-game decisions. However, the combat system is just not fun.

A convenient recovery from amnesia leads into the events of The Witcher 3: Wild Hunt, the only game you need to play if the Netflix series has got you jonesing for more Geralt. It technically picks up after The Lady of the Lake novel (though is, again, non-canonically), and has a main quest that's gripping and dire. You can also enjoy a ton of side quests that feel like stand-alone episodes from the show, or short stories from Sapkowski himself. Depending upon the difficulty settings, it'll satisfy both RPG newcomers and hardcore players alike.

Important to note: Yennefer and Ciri are only in The Witcher 3: Wild Hunt. There are references to Yen in Assassins of Kings, but Triss Merigold is Geralt's lover in the first two games, as his amnesia has erased his time with Yen.

And with that, hopefully you have a fairly good understanding of The Witcher books. The series really has become an all-encompassing phenomenon that can be enjoyed in so many ways – on the page, the screen, or in games – and each version is similarly fleshed out and wacky and gory.

Which Witcher is the best Witcher? The books are the original sacred texts, the games are endlessly entertaining, and the series is a beautifully modern take with a heavy (and necessary) dose of feminism and racial equality. We highly recommend tossing a coin to them all.

Read the books, played the games, and watched the first season of The Witcher on Netflix? Then read all about what to expect from The Witcher season 2.