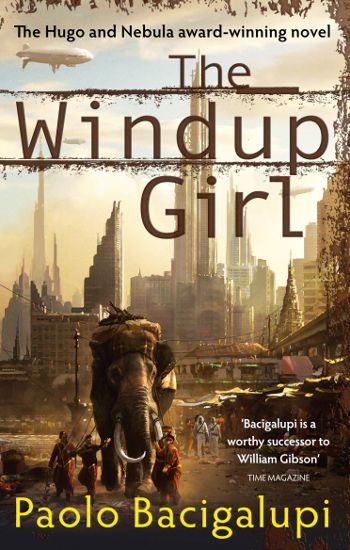 Tick tock, tick tock… the future’s closer than you think

Trade disputes are boring. Trade disputes do not make good stories. It’s become an SF mantra, something people want to hit George Lucas with over and over again. Trade disputes are not compelling. It takes a very talented writer to show that, actually, the mantra is wrong. It turns out that trade disputes, import laws and even carbon taxation can play a major part in phenomenally good science fiction.

The Windup Girl shows us a world in which the worst environmental predictions have come true. Coastal areas are underwater. Oil is gone. Food is scarce – and reduced gene pools mean killer viruses sweep through crop breeds and humans with a terrifying regularity. With no oil, calories are the only source of power. Humans eat them, then wind up radios, and sit at computers powered by treadles. Calories are everything, and they are scarce.

The novel is set in Bangkok, where the government has struggled to maintain its independence from the calorie companies and their sterile, copyrighted crops. Anderson Lake is undercover, working for AgriGen and looking for ways for his company to get a hold in the country, while trying to get access to Thailand’s own hidden seedbanks. On his search, he meets Emiko, a “windup”, a genetically-engineered human who has been bred to be loyal and obedient, with a tell-tale stutter motion to her movements to prevent her ever blending in. His obsession with her could prove fatal – and behind all this, the politics of Thailand approach boiling point as the Trade and Environmental Ministries battle for the heart of the palace and control of the country.

The Windup Girl has won both the Hugo and Nebula awards since its original release in the US, and it’s easy to see why. Pitch-perfect writing draws you into a world that seems not so far away from our own. It’s a dystopian thriller that combines the best of both those genres, with a plot to keep you reading and ideas that will keep you thinking long after you’re done. Multiple storylines weave in and out, with every character working to their own agenda. But no-one is entirely single-minded, and they’re all completely three-dimensional – complex histories and motivations make them all seem very real. The politics aren’t dry, sterile debates, but power plays, and riots in the streets, with people thrown from roofs and villages burned to the ground. It’s science fiction as warnings of the future, as social commentary, and as just bloody good storytelling – SF at its very best.