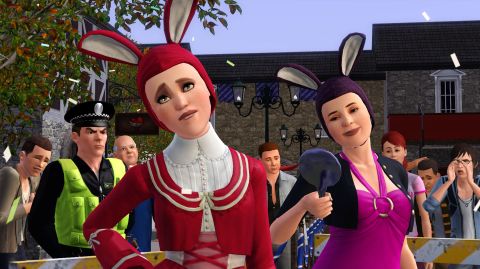 Forget Marcus Phoenix, Master Chief, and that dude in the Crysis suit. We’d like to introduce you to James Ray Dark, the toughest character this side of Sim City. James just came home from an eleven-hour day at work, fought off a burglar, and then spent twelve hours engulfed in flames. That last part was our bad. See, by shaking our 3DS we summoned an earthquake that made money fall from the sky, and as we rocked those fragile 3DS hinges we lost track of the gas lines beneath our Sim’s feet. Money fell harder - our JDR looked to the heavens and a single tear fell from his eye. And that’s when our house lit on fire. Let’s rewind.

The Sims 3 starts with a dangerously brief tutorial, a wham-bam for the legions of players who have already played various Sim iterations. In no time you’ll create a custom Sim (with plenty of sliders to customize your customizations), get a job, and light yourself on fire. By the second near-death experience, you should have the controls and camera down.

See, instead of implementing a slightly angled camera like every other Sims game ever, the Sims 3 on 3DS opts for a directly overhead view. The top screen allows you to zoom in and see what’s going on in 3D, but the bottom screen - where all your actions are performed - is locked to a very zoomed out, very top down view. Small items like a parfait cup or plate are ridiculously difficult to tap, which makes cleaning a nuisance.

Fortunately, your Sims’ AI (or “free will” as the existentialists at EA call it) is closely aligned to yours. If something’s bothering you, it’s likely bothering your Sim. Gone are the days of an unattended Sim eating a can of beans and then pissing his or her pants in the living room. For the first time ever, you can pretty much let your Sims do their own thing.

That’s due in no small part to the removal of the temperamental mood bars. This time around, your Sim’s mood is determined by Moodlets, which are individual grievances or excitements your Sim experiences. Brush your teeth and your Sim will be beaming with wintery freshness for hours. As you progress, you’ll uncover a few quick and dirty tricks to keep your Sims buzzing happily along like ferrets on Prozac. They’ll never question their pointless lives or the deterministic terror of a cruel/cool god who blatantly ignores/doesn’t blatantly ignore their wishes.

Those wishes are tangible, too. In The Sims 3, wishes are like objective-based Moodlets, and fulfilling them gives you magic power. Once you have enough magic power, you can summon one of three magical natural disasters to A) give you money, B) make you happier or C) make Sims fall in love with you. But be warned, these are natural disasters you’re summoning.

Which brings us back to that fire. Seasoned veterans will know how The Sims’ fires work - a single item bursts into flames and said flames begin to spread. This blazing inferno was nothing of the sort. This was Hell on Sim Earth. Well over 20 squares of our humble abode burst into blistering, blazing glory. The treadmill was reduced to a comically small pile of ash. Our three thousand dollar bed? In the dust bin. Luckily, Sims can’t die in the 3DS version or lil’ James Ray Dark would be toast.

Who could have known causing natural disasters could be dangerous? It’s nowhere in the game’s instructions or tutorial. In fact, not a lot is. The tutorial is smaller than your Sim’s bladder and if you’ve never played The Sims before, the 3DS version is vast enough to leave you scratching your head. You can build houses, go to town on a date, and even transfer your Sim to a friend’s 3DS - if you can figure out how.

The Sims 3 still has some huge concessions (One save slot?!) and an undeniably difficult learning curve, but if you give it enough time you’ll experience the same euphoria that made the original Sims so addicting. Our Sim was robbed blind, slapped for unseemly advances, promoted up the corporate ladder, became a guitar master, and clogged the toilet more times than GamesRadar after Taco Tuesday, and we’re still content controlling every aspect of his miserable little life.

So long as he doesn’t ask any questions, we won’t have to light his kitchen on fire again.