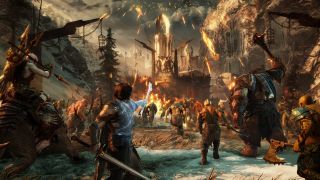 There's good reason why Middle-earth: Shadow of War has dropped the Mordor bit - it's got much bigger geographical plans. Speaking to OXM, Monolith Studios has talked about "massively increasing the scale of the game" to take in new areas.

Michael de Plater, vice president of creative, explains: "one of the reasons it’s Shadow Of War and not just Mordor is that we’ve expanded beyond Mordor. So the Dark Lord is growing his armies, and his forces – led by the Witch-king – have come out of Mordor and attacked and assaulted the human city of Minas Ithil. They’ve conquered it and turned it into Minas Morgul, which is the tower of the Witch-king. That actually brings the front line of this war out beyond Mordor and all the way forward to the kingdom of Gondor."

Ultimately, according to de Plater, "we’ve really focused on just massively increasing the scale of the game, making something truly epic. And that applies to the story and the villains, but it also applies very much to the world itself."

Read more about Shadow of War, Prey, Sea of Thieves and more in the latest edition of Official Xbox Magazine, on sale now.