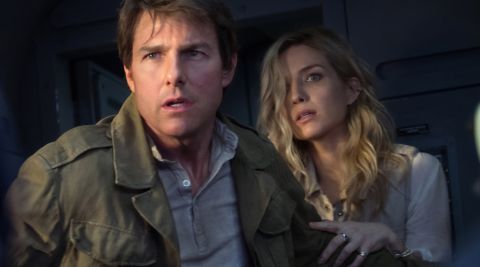 That’s a wrap: Universal’s monsters are back from the grave and up and running (what do you expect – it’s a Tom Cruise movie). Uneven, but plenty of fun.

Question: when is a Universal monster movie set almost entirely at night and featuring not just spiders, coffins and mist (lots of mist) but infanticide, patricide and necrophilia not a horror movie? Answer: when it’s a Tom Cruise summer blockbuster. But while there’s little here to jangle the nerves, The Mummy does wrap up enough adventure, action and quips to make it, if not a scream, a worthwhile Friday night out.

It opens with a flashback showing how Princess Ahmanet (Sofia Boutella) came to be mummified alive and entombed 1,000 miles from Egypt. We then smash cut to modern-day northern Iraq, where long-range reconnaissance soldiers Nick (Cruise) and Chris (Jake Johnson) gallop into a settlement crawling with insurgents. These bantering buddies are looters or, as Nick puts it, “liberators of precious antiquities”, and they seemingly hit the jackpot when an air strike unearths a subterranean chasm.

Descending into the pit with an archaeologist (Annabelle Wallis) who has history with Nick, our intrepid tomb raiders have no sooner exhumed Ahmanet’s remains than they find themselves cursed to spend the remainder of the movie running and screaming from what appears to be a prototype Terminatrix. Only by assembling various long-lost artefacts can they hope to banish this badass mutha – which means The Mummy at time looks like The Crystal Maze on a monster budget.

Much has been made of this reboot featuring the first female mummy, and Boutella displays all the right moves with her gymnastic grace and empowered strut, while also working wonders with her hypnotic amber irises – all four of them, in some scenes.

Shame, then, that she spends much of the film lusting after Cruise, unable to fully reanimate without his help. “You complete me,” she might as well say, and Cruise duly sets about showing us the money shots: running from a sandstorm through London’s streets as windows explode; scrapping with Russell Crowe’s Dr. Henry Jekyll as groundwork is laid to extend Universal’s Monster Cinematic Universe; and escaping a gang of swimming corpses in the most crazed underwater set-piece since a zombie fought off a great white shark in Zombie Flesh Eaters (1979).

It’s unlikely that Cruise intended such a comparison. But he does like horror movies – he made Interview with the Vampire long before Twilight made neck-biters sexy to mainstream viewers – and there’s funny business here with Chris that surely riffs intentionally on An American Werewolf in London, a movie he adores.

Elsewhere the humour doesn’t land quite so well, with some of the under-fire buddy-banter only making you want to dust down your trusty copy of Raiders of the Lost Ark. Conversely, The Mummy’s internal journey feels a little too solemn and glibly instructive as it seeks to map the desert of Nick’s heart. If we’re not vigilant, it warns, it is man who is the monster.

Directed by uber-writer and producer Alex Kurtzman (Star Trek, Transformers), there’s enough here to suggest that he should indeed continue with his plans to oversee the resurrection of Universal’s classic monsters (The Wolf Man, Bride of Frankenstein, The Invisible Man and Van Helsing are already in pre-production). Because while The Mummy has little of the deep heartache, sly wit or visual poetry that so distinguished the studio’s ’30s classics, it does deliver enough popcorn thrills to sate viewers who want their entertainment speedy and slick, without a cobweb in sight. To borrow from Frankenstein: it’s alive.

That’s a wrap: Universal’s monsters are back from the grave and up and running (what do you expect – it’s a Tom Cruise movie). Uneven, but plenty of fun.