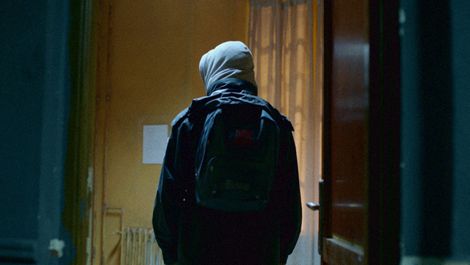 The Imposter has the concept of disappearance deep in its DNA.

First there are disembodied voices, fading credits, the pounding, purifying Spanish rain. Later, witness testimonies trail away in horror, and departing figures bleach themselves into the oblivion of sudden sunlight.

Bart Layton’s beautifully crafted documentary begins with the vanishing of Nicholas Barclay, a 13-year-old Texan boy, in June 1994. But its central character is Frédéric Bourdin, an extremely damaged young Frenchman longing to lose himself in the illusion of another identity.

“As long as I can remember,” he says, “I wanted to be someone else, someone who was acceptable.” He chooses Nicholas.

Despite not looking or sounding like Barclay, and being discovered by police three years later and 5,000 miles away, in Spain, Frédéric disguises himself – terribly – as the boy, now grown-up, and is welcomed with open arms by his grieving family.

The reason neither of them questioned the inconsistencies in his tale is painfully simple: they needed to believe him.

Layton is just as skilled a storyteller as his subject, fleshing out these incredible, often conflicting accounts with whatever comes to hand: talking-head interviews with family members and state officials; home-video footage (some shot by Nicholas himself) that crackles with static; snatches of conversations.

Sometimes he intercuts police phone calls with clips from ’70s detective shows such as Kojak . Elsewhere, he dramatises moments with stunning (if very subjective) neo-noir reconstructions benefitting from the contributions of cinematographer Erik Wilson ( Submarine ) and editor Andrew Hulme ( Control ).

In lesser hands, such technique might feel like a cheat. After all, documentaries are about establishing the truth, however ugly, not colluding in a fantasist’s beautiful cruelties.

But this is a documentary about fabricating stories, the allure of deception and how quickly the facts can vanish into the ether.

The effect of Layton’s efforts is to give credence to each of the claimants, so it’s possible to feel sorry for Frédéric even as the horrendous weight of his actions hits home.

One glimpse of Carey’s traumatised eyes says it all – not everything can be washed away, no matter how much we pretend it can.