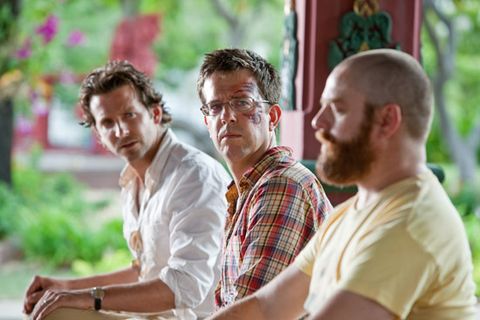 “It happened again!” groans a sweat-drenched, filthy, bloodied Bradley Cooper from the roof of a Bangkok hotel minutes into the follow-up to 2009’s smash hit. Oh yes, it did. Only more so.

In case you have been face-down in your own comatose drool for the last 2 years, a quick recap on what happened before: Three stag do friends woke up in a trashed Las Vegas suite with no memory of the night before and an AWOL groom.

Like Memento with delirium tremens, the trio had to piece together details of their debauchery to find their mate.

Employing an ‘if-it’-ain’t-broke’ methodology to the misadventures of Phil and gang, The Hangover 2 makes no apology for being a carbon copy of the original, just amped up, strung out and dropped into Thailand.

Which means after some perfunctory scene-setting – Stu (Helms) is getting married in Thailand so the boys have a pre-wedding quiet drink only to come to in Bangkok with amnesia and a member of the party missing – we can get down to the real business of watching the boys endure a series of gross out situations, humiliating disasters, pain and mental/physical duress.

Like its predecessor, the biggest pleasure of H2 is in the shock value, so it would be churlish to go into the fontrum-inducing plot specifics.

Suffice to say that aborted Mel Gibson cameo isn’t missed, Cooper gets dirtier as cocky Phil (dropping C-bombs in IHOP and dumping bodies), Helms excels at dismay with another ill-advised union and there are chain-smoking monkeys, dick-swinging ladyboys, dismemberments, motor-cycle helmet assaults, mobsters, a returning cameo (with appalling singing) and an animal shooting. Plus Paul Giamatti turns up to lay down some OTT rage.

While the broad strokes hit all the right beats, the devil is in the details. The cast and crew filmed on location, upchucking with food poisoning and wilting in the heat amid the madness of Bangkok.

And it shows, giving an unexpected layer of veracity to the wolfpack’s desperation and bewilderment, and anchoring the more outrageous moments in a screwed-up travelogue for Thailand’s most infamous city. Why wouldn’t that or that happen in a place this chaotic?

Not so successful is the hit-and-miss decision to expand the roles of Galifianakis’ sweet/stupid Alan and Jeong’s Mr Chow.

The Hangover rightly made a star of Galifianakis so while it’s entertaining to dial up Alan’s more nefarious side and peek into his geeked out bedroom, Mr Chow’s appearance (and his tiresome tiny penis jokes) jar, playing as a cynical franchise addition to appease the character’s unexpected cult following at the expense of logical plotting.