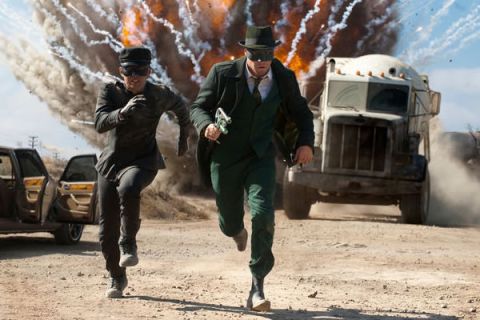 A retro redux of a 1930s radio series (itself revived on ’60s TV with Bruce Lee), The Green Hornet is, as you’d expect from Michel Gondry, no conventional caped crusade.

Instead, the Eternal Sunshine man has frothed up a goofy romp redolent of Mystery Men and The Mask, with dialogue that’s not so much superhero as Superbad.

“That is the balls!” gasps star/ co-writer Seth Rogen’s über-rich Britt Reid when he first lays eyes on the gadget-filled Chrysler Imperial that Jay Chou’s ‘sidekick’ Kato has knocked up for their nocturnal crime fighting.

After all, it’s not every caper that lets its stars sing ‘Gangsta’s Paradise’ en route to an ass-kicking, or that shows one typing up a resumé with ‘Masked Vigilante’ under special skills.

Committed to kook for a good chunk of its two-hour run-time, it’s only when Gondry starts kow-towing to genre conventions that ennui sets in. A frenetic third act full of explosions and car chases feels almost as redundant as a barely present Cameron Diaz (Reid’s secretary).

The Be Kind Rewind director is much better at reversing expectations, whether making Rogen’s doofus a gormless subordinate to Chou’s chop-socky whizz, or by saddling both Britt and underworld kingpin Christoph Waltz with inferiority complexes.

Yes, there are problems. Beyond some flaming debris and flying bottle-tops, the 3D scarcely impacts, while Chou’s un-fluent English cramps his innate charisma. But if you thought Ryan Reynolds had dibs on the colour green this year, think again.

Hornet may not be the bee’s knees, but it’s no bumble either.