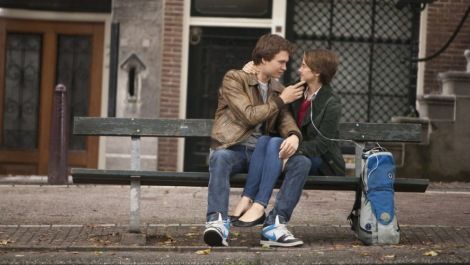 From the get-go the protagonist of this YA bestseller adap about terminally ill teens assures us this story is a not a sugar-coated Hollywood fable where everything can be fixed. “I like that version as much as the next girl does,” voiceovers 16-year-old Hazel (Shailene Woodley). “It’s just not the truth.”

Instead, Hazel’s truth is that it “bites” having incurable cancer, and dying sucks because the patient feels a responsibility to lessen the emotional casualties affected by their passing. Which is why Hazel isn’t about to go falling for the cocky in-remission kid, Gus (Ansel Elgort), in her cringy cancer support group or start to embrace the short, oxygen-fed life she has left…

But this is a Hollywood fable – and though John Green’s adored novel deals bluntly with the harsh realities of cancer, TFIOS is nevertheless a bittersweet uplifter. So this slick and smart adap is, inevitably, button-pushing to a degree. Whether you relish that depends upon your predilection for the Beaches , 50/50 s and Shadowlands of this world. Keeping a cap on the sap are Woodley and Elgort (previously Divergent siblings), who manage to deliver potentially crawly moments with clear-eyed integrity and charm.

Take their meet-cute where he insists on calling her ‘Hazel Grace’. Or his Hallmark-card declaration of love. Or the slow handclap by a crowd as they snog for the first time. All of which could’ve been cloying, but in the hands of Woodley the mush factor is negated and we’re moved instead. She and Elgort receive an assist by a poisonous third-act turn by Willem Dafoe as a bitter author and newbie director Josh Boone’s brisk, unsentimental lensing.