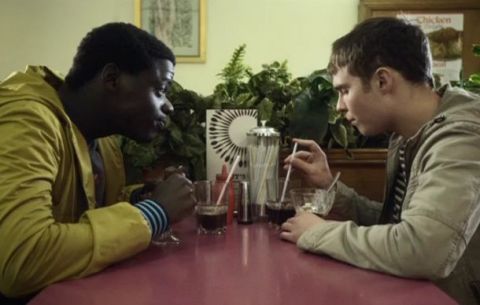 The One Where: Neil tells Paul he’s going to have to leave everything he knows behind in order to fight the war that’s coming.

Verdict: I’m a bit worried for the British education system. Is it usual for schools to allow intense looking chaps with dodgy eyes to wander round the corridors plucking out obviously vulnerable teenagers and taking them to disused buildings? I felt like a worried parent for Paul this week; he’s only known Neil for five minutes, and yet he’s already considering leaving his family and friends behind to go off and fight the nasty Fades. Now I know it’s a serious problem and all, but isn’t he being a bit hasty?

School-based security wasn’t the only issue this week though, in what proved to be a mixed bag of an episode. While Mac remains the most instantly likeable character, his awkward charm and easy-going comedy a front for some serious home-based issues, his constant flow of geek references were ladled on a bit thick this time around, feeling un-natural as a result. Meanwhile Neil’s nick-of-time saving of Paul was a little too convenient, and I know teenagers can be mean but Anna (Lily Loveless) is bordering on the psychopathic in her apparently baseless hatred of, well, everyone. Hopefully we’ll see more to her in the coming weeks than a mindless flow of bile, because otherwise it’s going to wear thin quickly.

It wasn’t all bad though – far from it, in fact. Paul’s struggle with his new powers and his internal turmoil over the responsibilities Neil is piling up on his insecure shoulders led to another cracking performance from Iain De Caestecker. There was loads more information to take in about the Fades themselves, and from the zombie-like chow-down in the forest to the shudder-inducing encounter in the deserted care home they’re turning into an eerie and formidable adversary for the ever-decreasing Angelics.

Mark’s storyline is swiftly becoming a gripping detective story in its own right as he discovered more about his ex’s past than she ever thought to tell him, and Sarah watching him get it on with his fling was one of the more disturbing moments. His classroom scenes have more than a hint of unreality about them (do kids really drop the f-bomb in conversation with their teachers nowadays? I must be getting old), but it’s refreshing to see a teenage party as monumentally crap as the one that Anna organises, even if it is in a creepy old church.

Geek off: Mac’s Death Star exhaust port metaphor was the pick of the film references this week, although it’s a miracle that it managed to convince über -bitch Anna to do anything other than laugh in his face.