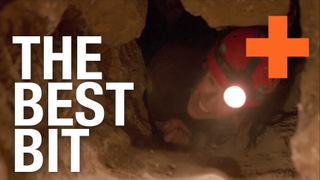 A claustrophobic turning point in a subterranean slasher movie.

Where can you watch it?

When it comes to modern horror movies, it’s tough to beat The Descent, which manages to weave scary creatures, pitch darkness, confined spaces, and personal betrayal into an experience that transcends the boundaries of “scary movie” to become something primal and true. The story follows a group of friends on a spelunking adventure gone horribly wrong as they take a wrong turn and end up in the feeding grounds of underground monsters. There are many things to be afraid of in the depths of The Descent’s caves, but the best bit in the movie is also its simplest scare: the rock tunnel.

All of the women in the party are experienced in the outdoors, so exploring the cave system is no big deal, especially as they think they’re in a very newbie-friendly location that’s been well mapped out and declared safe. When their path takes them to a narrow tunnel they have to crawl through on their bellies, they don’t think twice about it - until Sarah, who’s already somewhat mentally unsteady due to a recent personal tragedy - becomes wedged in the rock and starts freaking out.

Think about that one for a second. Two miles down, the only light you have is what you brought with you, and you’re stuck. Can’t turn around. Can’t even push yourself up to your knees. It’s a terrifying - all the moreso because it’s so plausible - scenario even before the rocks over Sarah’s head start to shift, but what makes it the best bit in the movie is its role as the possible turning point of the plot.

There are two interpretations of the events of The Descent. The most obvious one is what you see: women go into the cave, get lost, encounter monsters, and they all die. (Yes, including Sarah - the real ending of the movie is the one where she believes she sees her daughter’s birthday cake, not the one where she escapes.) The other interpretation is a bit more interesting. Mentally scarred by the death of her daughter and husband in a car accident the year before, Sarah panics so much when she gets stuck in that rock tunnel she breaks with reality, and everything that follows is a mixture of the truth and her delusions. The monsters? All in her head. But if the monsters aren’t real, who kills all her friends?

Watch carefully and you’ll notice that we see Sarah kill the same number of creatures as there are friends in the spelunking party. Even more interesting, Sarah repeatedly sees visions of her daughter’s birthday cake, which is adorned with five candles - until the very end, when it has six. Six women went into the cave, none came out.

Maybe the rock tunnel is just what it appears to be: a realistic peril that everyone in the audience can immediately understand and relate to. Or maybe it’s the jumping off point for the extended delusion of a shattered woman. Maybe it’s both. No matter your interpretation, though, the rock tunnel is definitely the best bit in The Descent.