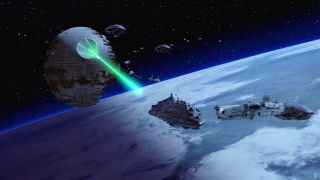 That's no moon. The vast spherical space station that’s become emblematic of all things Star Wars, the Death Star is the ultimate representation of the power of the evil Empire.

It's also the beating heart of Star Wars: Rogue One as Jyn Erso and a crew of Rebels and bounty hunters quest to steal the original plans. Here, Total Film magazine runs down the greatest on-screen incidents featuring the ultimate Imperial weapon before Rogue One delivers even more when it fills in the blanks between Revenge of the Sith and A New Hope.

Return of the Jedi has warned us how unforgiving Vader’s boss is compared to Darth, so we’re as worried as the lined-up stormtroopers when Palpatine steps off his shuttle, flanked by his Royal Guard. Then Vader kneels… and we really get scared.

Princess Leia comes to regret her “foul stench” remark after Governor Tarkin decides to test the Death Star’s destructive power on her home planet of Alderaan. Peter Cushing’s boots hurt so much that he did the whole A New Hope scene in slippers.

Those struggling to reconcile the prequels with their beloved originals whooped at the sight of Death Star blueprints in Attack of the Clones. And its half-formed appearance at the end of Revenge of the Sith proved the most effective way to bridge the trilogies.

Forget the Greedo shootout and the “I love you” line; nothing sums up Han’s badass space pirate spirit better than his attempt to take on an entire corridor of stormtroopers by running and shouting at them in A New Hope.

Better still – the expression on his face when he realises it’s not going to work. Let’s just pretend that hanger full of extra Special Edition baddies isn’t there though…

Star Wars Celebration 2015 saw Gareth Evans present the first Rogue One teaser. The camera slowly moves from a forest canyon to a giant moon. But that’s no moon… The footage was never released to the public, so remains the preserve of hardcore fans.