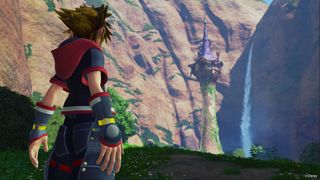 Are you a Disney die-hard? Do you happen to be a Final Fantasy fanatic? If the Venn diagram of your cultural tastes happens to overlap then there's a good chance Kingdom Hearts 3 is on your radar. After its triumphant showing at E3 this year, we at least know its basic foundation is close to complete. In a previous issue of Official PlayStation Magazine, the team sat down with game director Tetsuya Nomura to discuss everything from choosing which Disney films to include (although these ones definitely shouldn't) to the current progress of development…

The HD remixes on PS3 will help with the story, but KH3 will still be enjoyable for new players:
“Players that are jumping into Kingdom Hearts with this newest iteration will have various different ways to find out information on the different story plot points that happened in the previous games. The HD remix kind of collected together some of the key plot points for people who are jumping into this series new with KH3, to understand the plot points of the story itself. We’re hoping that that will help. In terms of gameplay, we’ve kept it consistent throughout the series so even if you’re not familiar or comfortable with an action game, we make the gameplay very exhilarating and fun to play. It should be something that even new players will enjoy when they come to Kingdom Hearts 3.”

There have been plenty of ideas for Disney-themed worlds, but The Lion King is definitely in there:
“It’s actually sort of a collaborative event. Team members put together ideas on what worlds they want to include, but more importantly what kinds of gameplay they want to include. So they will develop documents that lay out what kind of fun element that they want to include into each of the worlds and propose a whole bunch of ideas to me. Then I review the different ideas and see which would be most fun to include, which would be interesting and then build the story from there. And then I’ll flesh it out to make sure it fits into the world of Kingdom Hearts. Now, in terms of which world I prefer – of course, I’ve been saying this for a while now but it’s The Pride Lands, which is the Lion King world. That’s been my long-time favourite. This is one of the only worlds where Sora actually turns into a four-legged lion. And of course, throughout the series he’s turned into a Mermaid or was able to fly, but he was still just generally ‘Sora-shaped’ – so it’s very drastic and dramatic to see the game: included in Kingdom Hearts him on all fours and being in The Pride Lands. I’m not able to say what worlds I like that are not though, sorry!” [Laughs]

Those Disneyland-inspired roller-coasters will change combat forever:
“I like those different attractions! I’ve ridden many different kinds of rides. In terms of where and in what opportunities these attractions will show up, if you fulfill certain criteria it’ll trigger what we call the ‘Attraction Flow’. You’re given the choice to execute certain moves and, depending on the place and situation, it’ll dictate what is available to players. So it’s not something that you have a list of things to choose from; it’s more dependent on a place or situation.”

Making a true Kingdom Hearts sequel on current-gen has made all the difference:
“It’s actually a sort of personal rule I have that proper numbered titles are always going to be on a console, and spin-offs are going to be on a handheld. Developing for a console requires a lot of development time as well as the resources, and I wanted to have my development team gain experience of being quick on their feet and developing in a very fast-paced situation, but still have that experience and skill to bring high-quality in the optimum time possible. They’ve done multiple rounds of that now. It’s sort of like... it’s not a test, but more like we’ve got finished products and [people] able to finish products. [The spin-off titles] were a way of getting experience under their belt. So through all those different spin-offs we’ve been able to put out, we are now at that time where we’re ramping up for a console release, something that is a lot more challenging in terms of the time and the resources that are needed. The quality is different because it’s on a platform that is capable of such high-quality processing compared to a handheld. So now that [my team] has the experience, the bar is raised very high. As a team and myself, we feel that we are prepared and that we’re ready to take on this challenge.”