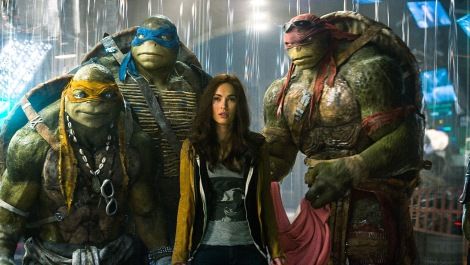 Those heroes in a half-shell have travelled a curious path, starting as a satirical indie comic in the mid-’80s before morphing into a merchandising phenomenon, with multiple movies and TV series seeing them renew their appeal again and again. That appeal’s based partly on the camaraderie and chutzpah of the plucky crime-battling quartet, and partly because they usually look cute.

The most daring thing about the soullessly efficient TMNT ’14 is that it does away with the cute, rendering the gang in off-putting CGI. Luckily, as counterbalance, the humans (Megan Fox, Whoopi Goldberg) are relentlessly cartoonish. The origin story’s been tweaked, but most of the players remain the same.

Mysterious criminal organisation The Foot Clan is running amok in New York; hot on their heels is fledgling reporter April O’Neil (Fox), who witnesses the evil clan getting trounced by four giant turtle-dudes. She realises the turtles are her former pets, flushed into the sewers after being injected with mutant juice by her mad-scientist father. Naturally, she teams up with her former pets to battle the Clan’s cyber-warriors and their wicked samurai leader Shredder (Tohoru Masamune). Many eyeball-searing explosions follow.

After super-sizing ’80s franchise Transformers , Michael Bay (who produces) was the clear choice to power-up this reboot. And like his robot-wars saga, it’s jammed with insane action sequences and gratuitous, lingering shots of Fox’s backside. Apart from our heroes’ state-of-the-art makeunders, all the trademarks are there: cries of “Cowabunga!”, goofy wisecracks, incessant pizza references. Business as usual, then, only a lot more business-like.