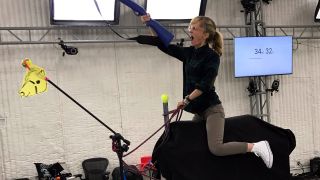 The Last of Us 2 is coming together in a motion capture studio somewhere in Los Angeles, and it has horses, machetes, and lots of green dots on people's faces. Ellie actress Ashley Johnson tweeted out this photo of her and Joel actor Troy Baker, showing them both all suited up in the studio (she was already putting in hours way back in December). Does this go against those "Joel is dead" theories? I dunno, if he was a ghost/delusion in the teaser he could totally show up as a ghost/delusion in the game, too.

Back in LA, shooting some video game. I think it has zombies in it. pic.twitter.com/bGC8MvfSB8April 14, 2017

The behind-the-scenes looks get stranger from there. Here's a video from creative director Neil Druckmann of Shannon Woodward flipping around a dang machete. Well, it's just a plastic blue toy machete for now, but it will probably look a lot more threatening in the real game. You might recognize Woodward as the Host-sympathizing behaviorist from Westworld - she didn't appear in the first game so "machete enthusiast" is the only clue we have for her The Last of Us 2 character.

I'm a little uncomfortable with the ease that @shannonwoodward took to that machete. pic.twitter.com/tZG1n959UYApril 13, 2017

The best photo, though, is another one taken by Druckmann. His co-writer Halley Gross probably doesn't actually appear in the game so don't get start getting ideas about horseback shotgun charges. But that horse mockup means more equine adventures are very likely on the way. Hopefully your horse friend doesn't meet the same tragic end as poor old Callus, Joel and Ellie's steed from the first game.

If we're lucky, they're getting some good work done in that performance capture studio and not just horsing around all the time. You know, because we still don't have a release date for The Last of Us 2. And horses. I'm sorry. I'll let myself out right after I plug some of our other articles.