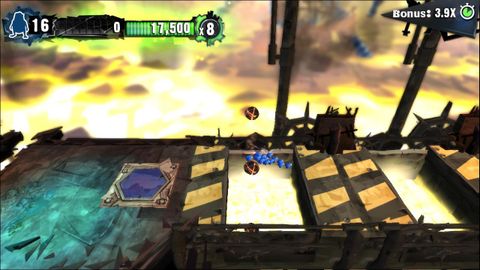 If you were to smash Pikmin, Lemmings and Oddworld: Abe’s Oddysey into one game, you’d get something very close to Swarm. Aesthetically, anyway. The gameplay, on the other hand, is much different in that you’re not directing a group of goofy-ass looking aliens using some command system but, instead, controlling an entire pack of them directly.

The story is fairly simple. The Swarmites have crash-landed on a strange planet whose architecture looks to have been built by a psychotic murderer. It’s your job to guide the Swarmites through this preposterously dangerous place in order to collect glowing DNA orbs to feed their “Momma” – a giant blue mass that can only be described as something pulled from your worst nightmares.

At the start of each stage (10 in total), you begin with a pack of 50 Swarmites. Directing these little guys through the opening stages starts off simple enough, but the game quickly ups the ante by introducing more nuanced controls and deadlier stages. The goal is to reach the end with at least one surviving Swarmite while achieving a preset score to unlock the next stage. Getting that high score for each level boils down to moving through the stage as fast as humanly possible to grab a time bonus and maintaining a constant flow of DNA collection to maintain a high score multiplier. Unfortunately for the Swarmites, each level is filled with traps, so the majority of your guys will end up crushed, choked, burned, sliced, poisoned, impaled, so on and so forth. Fortunately, the game is very liberal with respawn points that replenish your horde, as well as checkpoints in case the whole pack dies.

Swarm’s humorous/twisted focus on death is one of the most fun aspects of the game. Oddly enough, Swarm actually rewards you with Death Medals for allowing your Swarmites to bite it in particularly gruesome ways. This nifty (if not incredibly sadistic) system makes level progression all the more satisfying as many of the later environments hit you with some particularly unforgiving platforming sections that require you to sacrifice a great deal of Swarmites simply to proceed. Sadly, while it is refreshing to see a game that will genuinely challenge you, this hardcore aspect of Swarm might turn off a few of the more casual gamers.

Whether you’re admiring the cartoonish environments or watching an entire pack of 50 Swarmites get blown into blue paste, Swarm is a visual treat. The graphics definitely show off a higher production value and the artistic design for each stage is fantastic.

It’s always refreshing to have a good game like this sneak up on you. Controlling the Swarm is solid and the platforming requires a deft precision. It might be hard to tell from the released footage and screenshots, but this game is frantic and fun to play. Those looking for their next set of achievements/trophies won’t be disappointed and the score-chasing crowd should be satisfied with the challenge Swarm presents.